Trash are items in the Animal Crossing series that can be caught while fishing. There are three types of trash that can be caught in every game: the Boot, the Empty Can, and the Old Tire. Other trash items include Spoiled Turnips, Tree Branch, Rusted Part, Used Fireworks Fountain, forgeries, and any lost items that have expired.

In some Animal Crossing games, they cannot be sold for any Bells and mostly just take up pocket space. If dropped on the ground, trash will decrease the environment rating. They, like Rafflesia and Spoiled Turnips, can be used to attract Flies.Trying to give a villager a trash item can also negatively impact friendship.

There are several methods to dispose trash, with the most common method throughout the Animal Crossing series of sending the trash as a mailbox gift to a villager or to the player's friend.

When pulled from the water, each trash item has a unique sprite, though when dropped, all types of trash appear as a pile of garbage.

To dispose trash, the player can give the item to Tom Nook, in which he will dispose the item as he cannot buy it for Bells. The player can also drop the trash item in the Dump.

A player catching a boot in Wild World.

In Animal Crossing: Wild World, trash is much more commonly encountered. They can be disposed either through Tom Nook or the recycling bin, where Trash cannot appear.

A player catching a boot in City Folk.

In Animal Crossing: City Folk, trash is uncommon, serving the same purpose as in previous games. It can be disposed either through Tom Nook or the recycling bin.

In Animal Crossing: New Leaf, trash functions largely the same in the previous games. If the Keep Town Beautiful Ordinance is in effect, trash will not appear.

There are two methods of disposing trash in New Leaf. Firstly, the player can give the trash to Reese at Re-Tail to dispose it, but the player will need to pay a

80 Bells fee. Fishing out trash and disposing of it at Re-Tail increases the approval rating needed for the development permit. Secondly, the player can dispose trash either using the Trash Can public works project or a furniture that can dispose trash. Other players can also these objects to remove the trash. 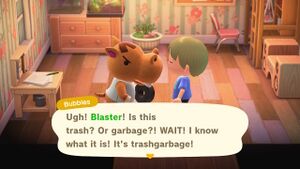 A player giving trash to villager in New Horizons.

In Animal Crossing: New Horizons, the player is freely able to sell Boots, Empty Cans and Old Tires to Nook's Cranny for

10 Bells each. However, Timmy and Tommy will not accept forgeries. They can also use a trash can furniture (such as the Garbage Pail) to dispose trash.

Another method to dispose trash items is to use them in DIY, as several recipes incorporate trash into them. Nearly all recipes can be obtained by catching varying amounts of trash (the one exception being the Lunar Rover, which is obtained from Celeste).

"You caught an old shoe! Gross! Put your foot down and say NO to littering!" —Animal Crossing

"I caught a boot! Keep our waters clean!" —Wild World

"I caught a boot! I hope someone lost this AND DIDN'T TOSS IT HERE!" —City Folk

"I caught a boot! Now where's your mate?" —New Leaf

"I caught a boot! It, uh, wasn't made for swimming." —New Horizons

"You caught an empty can! Nasty! You can't throw it back in!" —Animal Crossing

"I caught an empty can! You CAN't litter!" —Wild World

"I caught an empty can! Aren't you supposed to catch the fish before you can it?" —New Horizons

"You caught a tire! Blech! Roll on over to the dump and drop it off!" —Animal Crossing

"I caught an old tire! Did this come from Gracie's car?!" —Wild World

"I caught an old tire! Whose car did this come from?" —City Folk

"I caught an old tire! It was just treading water..." —New Leaf

"I caught an old tire! I sure am tired of that!" —New Horizons