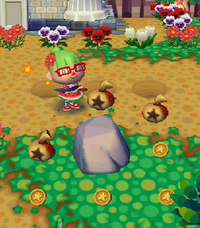 A money rock after being hit in City Folk

Money rocks (conjectural name[nb 1]), or Bell rocks, are rocks that produce Bells when hit with a shovel or an axe. Every day, one of the rocks in the player's town will turn into a money rock and can be hit repeatedly for increasing amounts of money. The allotted time window for a hit to produce money decreases after each hit. After all the money has been collected, the money rock will go back to being a normal rock. In all games, every bag spouted after the fourth consecutive bag/coin will play the '1-Up' sound from the Mario series.

The amount of money the rock gives varies from game to game and depends on how fast it is hit, the level of yellow Feng Shui, and, in Animal Crossing: City Folk, what it is hit with. Any obstacle adjacent to the money rock will also prevent bags from spawning there. For towns with more than one player, each player gets the money rock from separate random rocks.

In Animal Crossing, the rock will spurt out up to 23,300 Bells as three sacks of 100, three sacks of 1,000, and two sacks of 10,000. Having high levels of any (not just yellow) feng shui will increase the chance of more money spouting from the rock. Also, the money rock glows red when hit and gradually fades to gray, giving a visual timer as it will continue to spout money for as long as the rock is red. In later versions the rock simply remains gray.

Having a good money fortune from Katrina will dramatically increase the amount of money received from the money rock.

In Animal Crossing: City Folk, the amount of money that comes out is different from past titles. The order goes: 100, 200, 300, 500, 1,000, 2,000 and finally 4,000. If the player uses a silver shovel (golden shovels do not work), one or more of the money bags may be worth double, with a signature noise and sparkle. This has a 10% chance of happening for each hit. It has been proven that high yellow feng shui (over 73 yellow feng shui count) means that an 8,000 Bells bag will appear if the rock is hit fast enough.

After every hit against the rock, the player will rebound, causing the player to lose time and making it impossible to collect all of the potential money sacks. To prevent this, players can dig holes behind themselves to create a wall to prevent getting knocked back too far. Examples are shown below.

Natural features, such as trees and cliffs, if close enough, can also be used to prevent kickback, taking place of one or more holes.

It should be noted that in New Leaf and New Horizons, the left formation in the ones shown above will prevent the 8th money bag from appearing, therefore halving the amount that the player receives from money rocks. In other games, this is less of an issue, since the 8th bag only appears if the player has excellent yellow feng shui.