Legend of Zelda is an unobtainable furniture item in Doubutsu no Mori+ and Animal Crossing. It can be placed on the surface of tables and other similar furniture that have surfaces for items. The player can interact with this item to play The Legend of Zelda.

Although it cannot be obtained without the use of memory editing, Legend of Zelda is a fully functional item. In Doubutsu no Mori+, it is technically obtainable with a secret code, but the Nintendo's website never hosted the generator for this item, so it was never legitimately released. In Animal Crossing, the game is no longer a valid item that a secret code could even be created for. The fact that it cannot be obtained via a secret code, an attribute shared by e-Reader card items Ice Climber and Mario Bros, suggests it may have been planned to be obtained via an e-Reader card that was never released. The Legend of Zelda item was removed from Doubutsu no Mori e+.

The item does not have any color for the purpose of fêng shui. This item is lucky, meaning it gives a 777-point Happy Room Academy bonus when placed in the player's house.

Legend of Zelda in Doubutsu no Mori+

In Doubutsu no Mori+, Legend of Zelda is modeled after a Famicom Disk System rather than a Nintendo Entertainment System, and the game itself is the Famicom Disk System version. Another version of the item exists that plays the cartridge version (the version of the game used in Animal Crossing), but in Animal Crossing this item appears as a plain NES and does not function.

For more information about this game, see its corresponding article on Zelda Wiki. 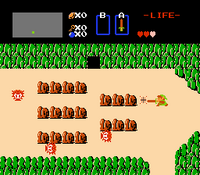 Gameplay of The Legend of Zelda. 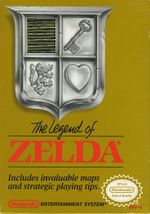 Box cover art of The Legend of Zelda.

The Legend of Zelda[nb 1] is an action-adventure game originally released on the Famicom Disk System in Japan on February 21, 1986, and on the Nintendo Entertainment System in North America on July 29, 1987 and in Europe on November 27, 1987. It is the first installment of The Legend of Zelda series. The game takes place in the land of Hyrule where the evil Ganon, bearer of the Triforce of Power, captures Princess Zelda, bearer of the Triforce of Wisdom. To prevent Ganon from stealing her Triforce, she scatters it into fragments, hiding it throughout the land. Playing as Link, a courageous swordsman that wears a distinct green outfit, he must journey throughout Hyrule to save the Princess Zelda and rebuild the Triforce of Wisdom. For that, he must defeat the minions of the evil Ganon in each of the eight dungeons in order to obtain the fragments of the Triforce of Wisdom. The game is set in the Fallen Hero timeline, where Ganondorf, the precursor to Ganon, managed to defeat the Hero of Time in The Legend of Zelda: Ocarina of Time.

The game is primarily non-linear, giving the player the option to choose different paths on what dungeons to complete, what items to obtain and buy, and ways to discover secrets. It is played on a top down view setup, meaning Link can move in four different directions using the D-Pad. The A button allows Link to swing his sword, while the B button can be assigned to equip different items, such as a Power Bracelet to push rocks on the overworld. After completing the game for the first time, the player can then access a harder Second Quest mode that changes the placement of items and makes enemies stronger. The Second Quest can also be access by typing "ZELDA" as the player's name.

The Legend of Zelda on other wikis