Soccer is a furniture item in Animal Crossing and Doubutsu no Mori e+. It can be placed on the surface of tables and other similar furniture that have surfaces for items. The player can interact with this item to play Soccer.

Soccer can be obtained from Tom Nook after providing a secret code that could be generated on the game's official website in October 2002.[citation needed] It does not have any color for the purpose of fêng shui. This item is lucky, meaning it gives a 777-point Happy Room Academy bonus when placed in the player's house. 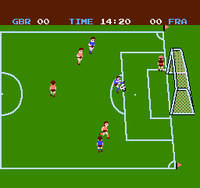 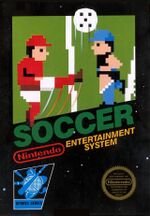 Soccer[nb 2] is an sports game originally released on the Famicom in Japan on April 9, 1985, and on the Nintendo Entertainment System in North America on October 18, 1985, and Europe in January 1987. It is a video game adaption of the real-life association football sport.

Soccer on other wikis