Donkey Kong Jr can be obtained from Tom Nook after providing a secret code that could be generated on the game's official website in October 2002.[1] It does not have any color for the purpose of fêng shui. This item is lucky, meaning it gives a 777-point Happy Room Academy bonus when placed in the player's house.

In Doubutsu no Mori+, Donkey Kong Jr is modeled after a Famicom rather than a Nintendo Entertainment System. Doubutsu no Mori e+ retains the design from Animal Crossing. 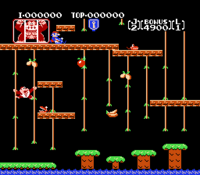 Donkey Kong Jr. is an arcade game that was later ported to the Nintendo Entertainment System. It is a sequel to Donkey Kong.