DK Jr MATH is a furniture item in every first-generation Animal Crossing game. It can be placed on the surface of tables and other similar furniture that have surfaces for items. The player can interact with this item to play Donkey Kong Jr. Math.

DK Jr MATH can be obtained from the raffle, Wisp, a treasure hunt, or trees when the player has good luck. It does not have any color for the purpose of fêng shui. This item is lucky, meaning it gives a 777-point Happy Room Academy bonus when placed in the player's house. 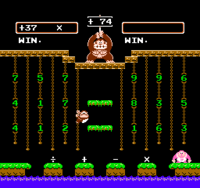 There are two main modes in Donkey Kong Jr. Math: Calculate and +-x÷ Exercise. In the Calculate mode, Donkey Kong holds up a sign with a number on it and Donkey Kong Jr. must climb vines to collect numbers, then use the mathematical symbols on the platforms to add, subtract, multiply, or divide to get to the number on the sign. In the +-x÷ Exercise mode, the player can select a type of equation and must solve it.