Mario Bros is an NES game furniture item in Doubutsu no Mori+ and Animal Crossing. It can be placed on the surface of tables and other similar furniture that have surfaces for items. The player can interact with this item to play Mario Bros.

In Animal Crossing Mario Bros can be obtained in a letter from Tom Nook after the player scans e-Reader card N02 at the e-Reader Transfer Machine in the post office. In Doubutsu no Mori+, Mario Bros can only be obtained by generating a secret code using the player's name and town name; however, Nintendo never officially distributed the generator for this game on their website, so it is not legitimately obtainable (a third-party code generator must be used). In Animal Crossing, Mario Bros is not a valid item that a secret code can be created for.

In Doubutsu no Mori+, Mario Bros is modeled after a Famicom rather than a Nintendo Entertainment System. Since e-Reader functionality was removed in the European version of Animal Crossing, this item cannot be obtained in that version without the use of cheats. 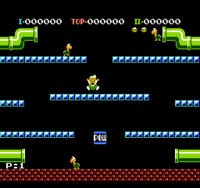 Mario Bros. is an arcade game released in 1983 that was later ported to the Nintendo Entertainment System.