Super Mario Bros is a furniture item in Doubutsu no Mori+ and Animal Crossing. It can be placed on the surface of tables and other similar furniture that have surfaces for items. The player can interact with this item to play Super Mario Bros.

Super Mario Bros was only legitimately obtainable in Doubutsu no Mori+, where a Nintendo GameCube Memory Card with the item data on it was sent to 30 winners of a sweepstakes in Weekly Famitsu Vol. 678 in December 2001.[1] The item is otherwise not obtainable in that game without a secret code, which Nintendo never officially distributed a generator for.

In Animal Crossing, the game is not a valid item that a secret code can be created for, and is thus not obtainable at all without the use of memory editing. However, the fact that it cannot be obtained via a secret code, an attribute only shared by e-Reader card items Ice Climber and Mario Bros, suggests it and the Legend of Zelda item may have been planned to be obtained via an e-Reader card that was never released. Super Mario Bros was removed from Doubutsu no Mori e+.

It does not have any color for the purpose of fêng shui. This item is lucky, meaning it gives a 777-point Happy Room Academy bonus when placed in the player's house.

In Doubutsu no Mori+, Super Mario Bros is modeled after a Famicom rather than a Nintendo Entertainment System. Since e-Reader functionality was removed in the European version of Animal Crossing, this item cannot be obtained in that version without the use of cheats. 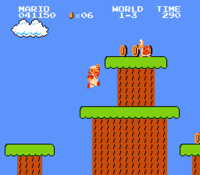 Super Mario Bros.[nb 1] is an platform game originally released on the Famicom in Japan on September 13, 1985, and on the Nintendo Entertainment System in North America on October 18, 1985, in Europe on May 15, 1987, and in Australia on July 1, 1987. It is part of the larger Mario franchise. The game takes place in the Mushroom Kingdom, where Bowser and his Koopa minions have invaded, turning the Toads into objects and capturing Princess Peach (named Princess Toadstool in the West), the only one who can reverse the spells placed on the Toads. Mario and Luigi both set out on an adventure to save the Mushroom Kingdom and Princess Peach from the Koopas.

The game consists of eight worlds, divided into four levels. Mario and Luigi must get to the end of the level and hit the flagpole (or in the case of last level of each world, an axe), all while avoiding obstacles such as pits and enemies. Common enemies include Little Goombas, who can be defeated by jumping on them, and Koopa Troopas, who once jumped on will leave behind a shell that the player can hit again to cause the shell to ricochet around, hitting other enemies in the process. If an enemy touches Mario or Luigi in their regular form, they fall down a pit, or the timer has ran out, they lose a life. If Mario and Luigi loses all of their lives, the game is over. The player can hold the B button and hit the Start button while on the title screen to restart back to the level they were originally on; otherwise the game goes back to World 1-1.

The player can hit A to make Mario or Luigi jump, while the player can hold B to dash. Throughout the game, Brick Blocks and ? Block appear throughout. Brick Blocks can be destroyed if under the Super Mario form, while ? Blocks provide Mario with power-ups or coins. Obtaining the Magic Mushroom causes Mario or Luigi to become Super Mario, while obtaining the Fire Flower causes Mario or Luigi to become Fiery Mario. Meanwhile, the Starman grants Mario or Luigi invincibility from enemies and obstacles. After reaching the end of World 8-4, Princess Peach gives the player the option to start a "new quest", which replaced all Little Goombas with Buzzy Beetles, making ground enemies faster, and changing certain levels for added difficulty.

Super Mario Bros. on other wikis