T.I.Y. (formatted as T.I.Y in its logo) is a store in Animal Crossing: New Leaf owned by Timmy and Tommy. It is the fourth incarnation of the Nooklings' store, and it appears on Main Street. The store features more items than its previous incarnation, Super T&T, and it features an entrance to the Garden Shop from within the store. 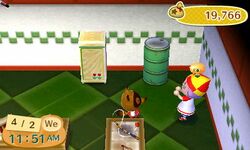 T.I.Y. sells twenty items each day, including five furniture items (one of which is always wall-mounted), three tools, two Fortune Cookies, two wallpapers, two flooring, two sets of stationery, one Wrapping Paper, one Melody Paper, and one K.K. Slider song. Additionally, one of the furniture items may be replaced with a spotlight item on certain days. During certain events the Fortune Cookies will be replaced with event-themed items, such as Fireworks Fountains or Candy.

T.I.Y.'s music continues Timmy and Tommy's leitmotif in a fast-paced guitar theme. Since the Garden Shop is in the same building, a new rearrangement of its original music matches on top of it. These are usually never heard at the same time, but seamlessly change when going in between rooms.