In the prerelease build of Animal Crossing: New Leaf shown at E3 2010, a number of significant differences from later builds can be seen in screenshots released to the press.[1]

Different textures and models are used for trees, fruits, flowers, and houses. Furthermore, all models use very different lighting than their final release counterparts and the sky notably lacks any clouds. Public works projects had stone underneath them, much like key buildings do in the final game. Some flowers, particularly tulips. appear to have much more detailed 3D models than in the final game.

A further screenshot seems to show that the beach was originally going to have a slight slope going into the ocean.

In one of the screenshots, a male character is seen with a hairstyle not found in the final game. It appears to be an early version of the messy hairstyle. 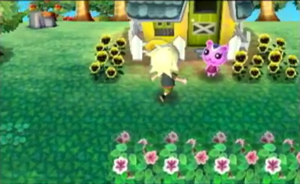 The same build as depicted in the E3 2010 screenshots was shown in a software lineup reel during Nintendo's 2010 Tokyo Game Show conference.[2] The footage appears to have been taken at the same time as the screenshots, showing many of the same things. The most notable new thing shown is a full view of an early villager house. It bears a close resemblance to the house design used in Animal Crossing: City Folk and has a small walkway not seen in the final game. Alongside the beach screenshot from E3, it appears that there may only be one villager house design at this point in development.

A lineup trailer released on January 19, 2011 shows further video of the E3 2010 screenshots, showing some new footage.[3] None of the footage reveals anything not already shown in prior media.

Animal Crossing: New Leaf was formally revealed with a video trailer at E3 2011.[4]

The game, while not quite finished, looks much closer to its final state. Lighting has been substantially improved and the skybox now has clouds. Fruits and houses look very close to the final game, although the tent has a bundle of wood that was later removed. The small walkway previously seen remains, but appears to have been redone. The stone underneath public works projects has been removed, bringing them to their final appearance, and it is shown that villagers can sit on benches.

Trees and flowers have been redesigned, still appearing similar to what was shown in E3 2010 but with redone models and textures. Cedar and palm trees are first shown, the former featuring a significantly different design than in the final game and the latter appearing identical to the final save for a slightly taller trunk.

Text boxes have been slightly redesigned, with the speech bubble replaced with a rectangular label and the color changed from blue to the light beige used in the final game's dialogue boxes. The label color now matches the final game, although with a gradient effect on it.

Wet suits make their first appearance in this trailer, seemingly identical in functionality to the final game. Notably, the dock has a different design and does not have a Tortimer Island box. Kapp'n is also not present but may simply not be unlocked yet. The beach also no longer has the slight slope seen in previous media.

Various other things are shown for the first time; including Isabelle, mushrooms, sneaking with nets, and furniture on walls; all appearing similar to the final game.

Further video was shown at Tokyo Game Show 2011.[5][6] This build appears to be very similar to that shown during E3, showing a lot of new things not seen then.

The trailer is in Japanese, with dialogue revealing that the player is the mayor. It begins with the player deciding where to place their house and talking to Tom Nook, who looks the same as he does in the final game. Later dialogue with Isabelle, then called Hisho (Japanese for secretary) rather than her final Japanese name of Shizue, shows a player deciding where to build The Roost.

A number of additional features are shown, seemingly functionally identical to the final game. This includes the ability to sit on tree trunks, custom furniture (in the form of a player character placing down a Cabin Couch customized with the Heart Tee), and multiplayer.

It also appears that tulips were redesigned between E3 and this trailer, as they much more closely resemble the final game.

After the conference, Nintendo posted a Developer Roundtable to the Nintendo Channel.[7] In it, Animal Crossing: New Leaf's lead developers displayed concept art and mentioned a few features that had not been shown in video yet. These included Main Street, the existence of a "furniture shop", the ability to customize the house exterior, and the Happy Home Showcase. 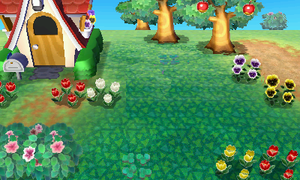 A screenshot corresponding with the E3 2010/TGS 2010 build can be found within the game files. It depicts the early house model seen in other media of this build, with no visible player character in frame.[8] The early tulip models are particularly visible in this image due to the angle.

An unused version of an icon used when replacing the player's bed in the [[Attic#Animal Crossing: City Folk

Animal Crossing: New Leaf adds covers for all K.K. Slider songs in the game. Found in the game's files is an early cover for "K.K. Swing." It looks nothing like the final cover, but bears a resemblance to that used for "Hypno K.K." It appears to use the model for K.K. Slider from Animal Crossing: City Folk.[8]

The Blue Argyle Tank is a fully functional item that has existed since the initial version of New Leaf and is unobtainable in-game. The item is a unisex tank top that has the basic style and the blue and gray colors. It can also be sold to Re-Tail for

880 Bells. Due to its unavailability, it was speculated that the Blue Argyle Tank was planned to be distributed as DLC for the game, but was never released.[citation needed]