Jock[1][2] is a male villager personality type in the Animal Crossing series. Jock villagers are energetic and have an interest in physical fitness and activity.

As of the release of Animal Crossing: New Horizons, there are a total of 79 jock villagers across the series,[nb 1] making it the most common personality; 57 appear in New Horizons. In New Horizons, a jock is always one of the two starting villagers on the player's island. 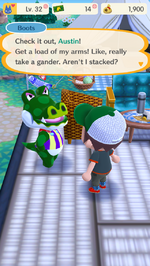 Boots, a notable jock, shows off his muscles to a player in Animal Crossing: Pocket Camp.

Jocks are often depicted as energetic and obsessed with sports, talking frequently about their love of sports and sporting progress. In Animal Crossing: New Leaf, they speak with loud, shouting voices, and often use slang such as "bro" (as in "You're so cool, bro!"), "hit me up," or "yo." Stereotypically, they are also unintelligent, calling the brain "the Brian" and failing to grasp the concept of the game "rock, paper, scissors." In addition, jocks are also slightly overbearing in their interests, often obsessively asking the player if they are training "like a madman." When jocks get sad, they say something like "I'm just sweating through my eyes!" They do not worry so much about fashion. However, the jock villagers are also brother-like when befriended, giving pep talks to the player and appearing competitive toward them and other villagers when they partake in town events.

Below are some (not all) quotes made by jock villagers.