Nindori (ニンドリ, Nindori?) is a jock ostrich villager in Doubutsu no Mori e+. He was created as a collaboration with Japanese gaming magazine Nintendo DREAM[1] as part of a contest to create a mascot for the magazine,[2][3] which began in Vol. 94 and had the winner announced in Vol. 100. Nindori can only move to the player's town if his e-Reader card, which was exclusively included in Vol. 102 of the magazine, is scanned.

Nindori's name is directly derived from Nintendo DREAM, which is often abbreviated as Nindori. He has continued to be the magazine's mascot separate from the Animal Crossing series since he first appeared, and is often referred to as Nindori-kun. His catchphrase ドクソウ could either mean "originality" (独創) or "riding solo/doing thing one's own way" (独走), both referring to his origins. Nindori is currently the only ostrich who is absent from the series.

Nindori is an orange ostrich with a yellow beak and feet. He has black-tipped wings and tail feathers. His eyes are very large and black, with just a small portion of his sclera showing. He has a few yellow hairs sticking out of the back of his head, and his head resembles the layout of a Nintendo GameCube (which was released in orange in Japan).

Nindori is a jock villager with an interest in fitness and sports, which he will mention frequently. He will get along with peppy villagers, but will not get along with lazy villagers due to their dislike of exercising. 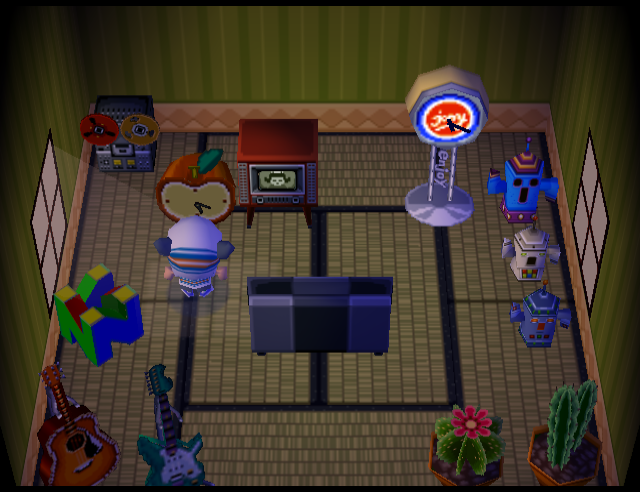 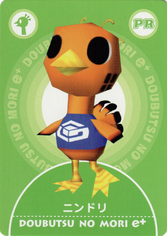 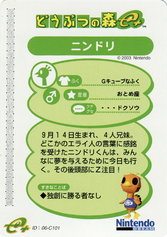