Fruity (フルーティー, Furūtī?) is a jock duck islander in Doubutsu no Mori e+. He can only move to Animal Island if his e-Reader card is scanned. He requests the player for several fruit-themed items for his house, referencing his namesake. His catchphrase, guava, is a tropical fruit, which relates to his name and islander theme.

Fruity is a black duck with blond hair and big eyes. The tips of his arms are white.

Fruity is a jock, which means he will enjoy exercising and talking about fitness. Despite his arrogant behavior, he is friendly to the player and easy to get along with, oftentimes asking them for competition. However, he won't get along with lazy villagers, who have the opposite lifestyle, as well as offend snooty villagers by questioning their fitness.

As an islander, Fruity's house in Doubutsu no Mori e+ will begin with only one furniture item, along with the exotic wall and bamboo flooring. He will request specific items for the player to give to him, which he will place in his house. After he places two items in his house, he will upgrade his wallpaper, and after he places five items, he will upgrade his flooring. Pigleg requests for the same items as Fruity, although his house has different wallpaper and flooring. 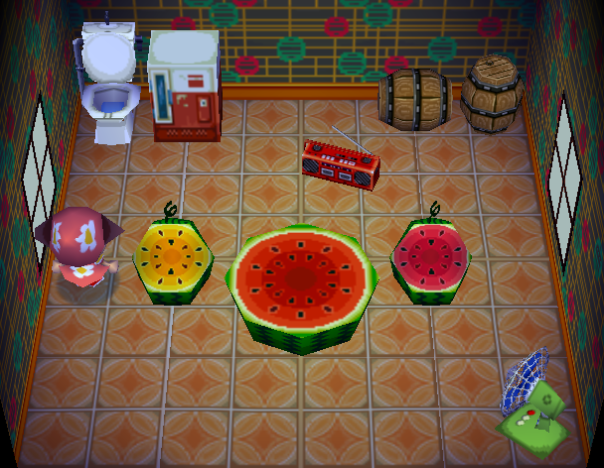 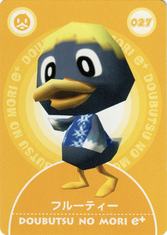 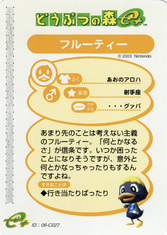