"He's rather calm and very gentle. I'd consider him an oasis for your heart here in <town>!"
— Isabelle, talking about a lazy villager, Animal Crossing: New Leaf

Lazy[1][2] is a male villager personality type in the Animal Crossing series. Lazy villagers have a relaxed, laid-back lifestyle and appear friendly toward the player. They often talk about food and are humorous or naïve during conversations.

As of the release of Animal Crossing: New Horizons, there are a total of 72 lazy villagers across the series;[nb 1] 63 appear in New Horizons.

Appearance-wise, many lazy villagers are depicted with droopy eyes and a lazy smile. Often, they also appear to be younger than most villagers. Some lazy villagers, however, have appeared to be much older at times, or have filled their homes with older-style furniture, such as Doc, Nate, Otis, and Sven, implying that these lazy villagers are in reality very old and therefore aloof due to their age. 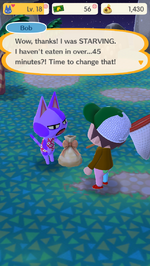 A player giving Bob, a notable lazy villager, a snack in Animal Crossing: Pocket Camp, to which he remarks not eating for 45 minutes.

Lazy villagers have a relaxed and laid-back approach to living in the town unlike the normal meaning, not being bothered by homework or chores and doing laid-back things. They appear somewhat goofy or naïve, in the way they speak and talk about hobbies, particularly fashion. Often, they will have dreamed up an "alter ego" of Fashion Lad. In Animal Crossing: Wild World, they may mention reading an unseen magazine, called "Chillin' Magazine," which also reflects on their chilled, relaxed lifestyle. In New Horizons, they frequently mention that they talk to and make friends with bugs, including some that have apparently infested their houses. Because of this, in New Horizons, they are the only personality type that will not respond with disgust upon seeing a Cockroach in a player's house. However, they will still immediately leave, citing various reasons like not preparing for a cockroach party.

They often mention theories relating to certain aspects of the town, which they will mention in conversation to the player or other villagers. For example, some lazy villagers will wonder aloud who has to sit inside the Tom Nook Point System to make it talk, suggest that Tom Nook's store has a basement filled with Tom Nook stuffed animals, or posit that they are part of a game for someone else's amusement (but then claim it was a joke). In some games, they may express a fascination with Tom Nook's fluffy tail.

In Animal Crossing, the lazy islanders Boomer, Dobie (until Welcome amiibo), and Yodel, as well as the lazy Doubutsu no Mori e+ islanders Kidd (until New Leaf), Raddle, and Roswell (until New Horizons), are much more stubborn than their mainland counterparts; acting independent, saying that they "belong to no one" when first spoken to, in a similar manner to a cranky villager, but are also airheaded. Despite this depiction, however, only Dobie returns with a proper cranky personality.

Lazy villagers are often the easiest to befriend. To do this, the player can simply send the chosen villager mail containing gifts and repeatedly talk to them. Often, the player can receive their picture. Depending on the game, benefits may include:

Below are some (not all) quotes made by lazy villagers.