"You know, he might seem like a bit of a show-off, but he's still quite the lighthearted gentleman!"
— Isabelle, talking about a smug villager, Animal Crossing: New Leaf

Smug[1] is a male villager personality type in the Animal Crossing series introduced in Animal Crossing: New Leaf. Smug villagers are portrayed as arrogant and egotistical, acting sophisticated and thinking highly of themselves. 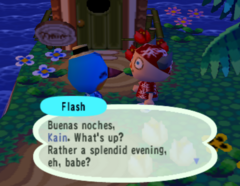 Smug villagers commonly act arrogant, boastful, and egotistical (hence the name "smug", which means prideful), which may lead to them unintentionally belittling the player in a similar manner to snooty villagers. They speak with the voice that was originally used exclusively by Farley in Animal Crossing: A sophisticated, charming voice. Like snooty villagers, smug villagers also enjoy gossiping about other villagers and spreading rumors. Beneath the surface, however, they are kind-hearted villagers that act very polite, sometimes gentlemanly, and may flirt with the player, regardless of gender, when befriended.

The personality is likely derived from the behavior of the cranky islanders in Animal Crossing and Doubutsu no Mori e+, specifically Flash, O'Hare, and Rowan, alongside Curlos, Frank, and Weldon in e+, which behave in a similar manner to smug villagers. However, only O'Hare and Curlos return with the smug personality, and Kidd, who was lazy as an islander, is given this personality as well. Additionally, despite being apparently based on the mannerisms of cranky islanders in early games, smug villagers feature voices more similar in pitch to other personality types, rather than the deep voices that still remain exclusive to cranky characters.

Below are some (not all) quotes made by smug villagers.