Don is a brown mole with a dark-brown beard, black whiskers, and black, upturned eyebrows. Like Mr. Resetti, Don wears a white shirt, blue overalls, black boots, and a yellow helmet. Don is taller and thinner than his brother. In Doubutsu no Mori+ only, Don instead wears a green helmet with a white stripe, and no overalls.

Don is not as harsh as his younger brother, and will merely advise the player about saving, rather than yelling, threatening them, or having the player repeat sentences after him.

Artwork of Don from Animal Crossing. 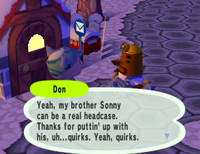 Don explaining to the player how his brother can be harsh.

In Animal Crossing, Don Resetti replaces his brother the seventh time the player resets. He appears mellow in comparison to his brother, by not shouting and screaming at the player for resetting.

Don is a new character added to Animal Crossing and is not present in Doubutsu no Mori.

Don will also sometimes be present in the Resetti Surveillance Center. This can be accessed after 8:00 PM on random nights and if one of the two traffic cones are removed. Once the player enters and talk to Don or his brother, they will give the player a Silver Shovel to leave. 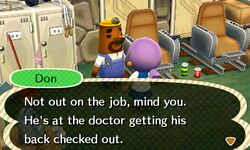 Don Resetti also appears in Animal Crossing: New Leaf. He replaces Mr. Resetti the sixth time the game is reset after the Reset Center has been built and does not appear again. If the player visits the Reset Center five times, Don will give his picture to the player.

Like his brother, Don also works with the Rescue Service and only appears via dialogue. He sometimes fills in for Mr. Resetti, and he may also appear in Resetti's place if the player calls the Rescue Service excessively, mentioning Resetti is taking a break. He will tell the player to think of him as a role similar to a substitute teacher, keeping his calm demeanor and admitting that he is new to the program.

Don's Poster can be obtained from Nook Shopping after inviting him to Photopia via his amiibo.

With the release of the 2.0 Free Update, Don now occasionally shows up in The Roost. If his amiibo is scanned, he will bring Mr. Resetti along with him. 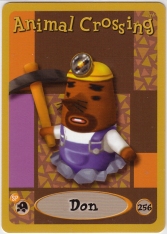 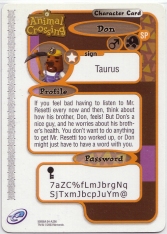 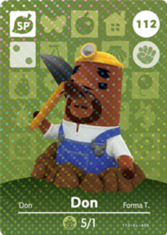 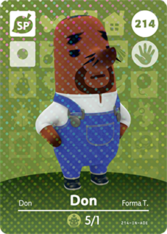