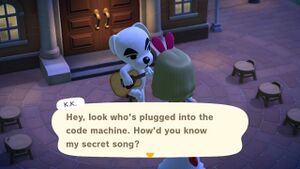 K.K. Slider acknowledging that the player has requested a secret song in Animal Crossing: New Horizons.

In each of the Animal Crossing series games, K.K. Slider has a handful of secret songs that can only be obtained by request; he will not play them randomly, only if they are given to him by name. They are still part of his setlist, meaning that obtaining them is necessary for completing the catalog. The intended way to obtain these songs is to hear about them from other players, hear them in certain villagers' homes, or on the radio. Villagers will also occasionally tell the player about them.

When a secret song is requested, K.K. will express surprise before playing it. After this, he will give the player a bootleg recording, as with standard songs. Each game typically introduces three secret songs.

Additionally, certain songs cannot be obtained at all, only being heard when the player requests a song that is not available in K.K.'s setlist. These are most commonly found when misspelling a genuine song's name, such as "K.K. Cruising" rather than "K.K. Cruisin'". After hearing one of these songs, K.K. will say that he simply improvised a tune on the spot; therefore, he doesn't give the player a bootleg. In each game, there are three of these "invalid" songs, and they become properly obtainable secret songs in the following installment.

Since this was the first iteration of the series, there are three obtainable secret songs and three unobtainable "not my bag" songs.

The secret songs are "K.K. Song", "I Love You", and "Two Days Ago"; the first of these is Totaka's Song, a common Easter egg for games that composer Kazumi Totaka has worked on.

One of the unobtainable songs, "Forest Life", is notable for being a remix of the game's main theme.

In Doubutsu no Mori e+ and Wild World[edit]

In Doubutsu no Mori e+, the previously unobtainable songs ("My Place", "Forest Life", and "To the Edge") are made available only by request. However, the three secret songs from prior versions still remain request-only, meaning the game uniquely has six secret songs. In Animal Crossing: Wild World, while no new songs are added, "K.K. Song", "I Love You" and "Two Days Ago" are made normally obtainable, setting the trend for the rest of the series.

Three new unobtainable songs are introduced in place of the now-obtainable ones. One of these songs, later named "Spring Blossoms", is a remix of the original Cherry Blossom Festival from Doubutsu no Mori and Doubutsu no Mori+.

The three unobtainable songs are now available as secret songs, being named "Stale Cupcakes". "Spring Blossoms" and "Wandering". K.K. can play these without being requested through the new "encore" feature. Three new "invalid request" songs are introduced; one of them, "K.K. Island" in New Leaf, is a remix of the Animal Island theme from Animal Crossing.

As before, the previous unobtainable songs—now named "Hypno K.K.", "K.K. Stroll", and "K.K. Island" —are available as secret songs. Three new ones are introduced. One, named "Animal City" in New Horizons, is a remix of the city theme from City Folk. As this game introduces album art, the secret songs now have art associated with them. They are also reorderable from the catalogue.

The three unobtainable songs from New Leaf are named "Animal City", "Drivin'", and "Farewell", and are properly available as secret songs. (Unlike in New Leaf, neither they nor "K.K. Birthday" are available to order from the catalogue anymore.) Three new invalid songs take the secret ones' place, as always; on the official Atsumare Dōbutsu no Mori: Original Soundtrack 2 and Atsumare Dōbutsu no Mori: Totakeke Music Instrumental Selection albums, they are given the name "はずれ" (hazure), meaning "miss" or "failure".