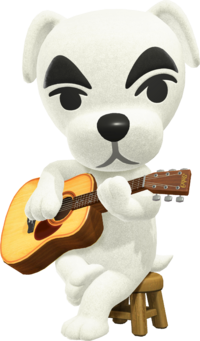 The following is a complete list of songs performed by K.K. Slider throughout the Animal Crossing series. K.K. Slider will perform live in town every Saturday night, though the venue differs between games. When spoken to, he will give the player the option of requesting a specific song or letting him choose. After watching one of K.K.'s performances, he will freely give the player a bootleg recording (also known as an aircheck) that can be stored inside a music player in order to listen to the song in their house. These recordings differ drastically from the live version of the songs. Doubutsu no Mori e+ features Live Recordings, which allow the player to listen to the live version of each song from a music player instead of the bootleg recording. Live recordings are not present in any other game, however.

In each game, K.K. Slider has a handful of secret songs that are request-only, and counted as part of his catalog. If given a request that is not part of his setlist, he will play one of three random songs that cannot be obtained; these unobtainable songs become secret songs in the next installment. From City Folk onwards, the player can specify a mood and K.K. Slider will play a random song that is appropriate to the selected mood.

In Animal Crossing: New Leaf, cover art is introduced for each song, with cover designs of original songs taken from the art used for their e-Reader cards. The player can mount the covers on the walls of their house as decoration. For Animal Crossing: New Horizons, nearly all album covers from New Leaf have been redesigned, both noticeably and subtly. In most cases, the indecipherable text that appeared in New Leaf has been replaced with each song's proper name, using the language most appropriate to its genre (for example, "K.K. Jongara" uses its Japanese name, "Café K.K." uses its French name, and "K.K. Steppe" uses its Cyrillic name).

The total number of songs as of New Horizons amounts to 95.