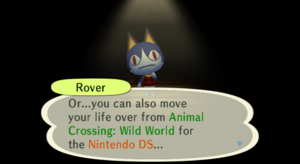 Rover telling the player about transferring over data from Wild World

When a Wild World character is transferred, the new City Folk character will retain the player's name, eyes, face, and hairstyle; as a result, Rover does not ask any questions on the bus. The player being transferred can have the same name as another player in town, which is normally not possible. Most furniture, wallpaper, flooring, tops, accessories/headgear, umbrellas, and stationery in the catalog are transferred from Animal Crossing: Wild World via the Moving Van. Items that cannot be reordered from the catalog in City Folk are not transferred over; since no fossils or gyroids are reorderable, none are transferred. Additionally, any items in the player's inventory, any clothing they were wearing, their bug and fish encyclopedias, and their savings account are not transferred via the Moving Van.

The miniature car, birthday card, and four-leaf paper are only obtainable in City Folk through the catalog after a transfer has been made. If the player has a nurse's uniform in their Wild World catalog, the doctor's coat becomes cataloged in City Folk.

When the player meets Tortimer, he and Pelly have different dialog if they moved in via the Moving Van:

Additionally, when the player meets Mr. Resetti, he has different dialog if they moved in via the Moving Van: