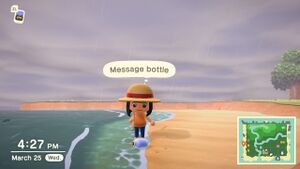 A message bottle on the beach in Animal Crossing: New Horizons

See also: List of note in a bottle messages in Wild World 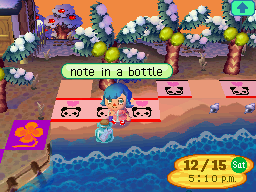 A note in a bottle on the beach in Wild World

In Animal Crossing: Wild World, a note in a bottle can be purchased from Tom Nook's store for 200 Bells, and an unlimited amount can be purchased per day. The item is placed with the letters in the player's pockets, and like a letter, a message can be written and an item can be attached. A written note in a bottle can be released at the beach; once one has been released, the player can access Tag Mode from the title screen. While in Tag Mode, the note in a bottle that was sent out can be received by any nearby player who is also in Tag Mode, and vice-versa. Additionally, notes in bottles containing DLC items and messages written by Nintendo were sent out through Tag Mode via a special Game Card in DS Download Stations.

The ability to send and receive notes in bottles through Tag Mode can be turned on and off from the phone in the player's attic. 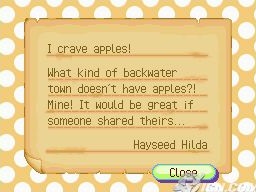 A pre-written note in a bottle message

In Animal Crossing: City Folk, an unused note in a bottle item, likely leftover from Wild World, appears in the game and can only be obtained through the use of memory editing. It has no functionality, but it can be sold for 50 Bells. 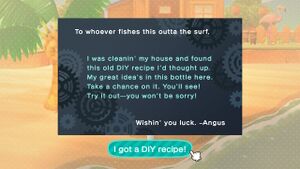 In Animal Crossing: New Horizons, one to two message bottles wash ashore on the island each day, and they contain a letter from a villager alongside a DIY recipe. Each villager personality has different letters and recipes, which are the same recipes that can be given by villagers in-person.

During the Bunny Day celebrations, egg message bottles can appear on the beach, containing a message from Zipper T. Bunny and a Bunny Day DIY recipe.

Throughout 🎬 Gekijōban Doubutsu no Mori, Ai finds several notes in bottles on the beach that tell her to plant cedar trees for the Winter Festival and are implied to be sent from an alien. It is later revealed that Gulliver sent the messages to impress the residents of Animal Village while he masquerades as an alien.