For the villager whose Korean name is Kiki, see Nana.

Kiki is a normal cat villager in the Animal Crossing series who appears in all games to date. Her name may come from the film Kiki's Delivery Service, which features a black cat named Jiji.

In New Horizons, Kiki has the education hobby and can be seen wearing rimmed glasses, reading a novel while outside, and using a magnifying glass when near certain objects.

Artwork of Kiki from Animal Crossing.

Kiki is a black cat with black eyes and yellow sclera. In all games except New Leaf, her eyes are round, while they are slightly oblong in New Leaf. She has perked-up ears that are bright magenta inside, and a black nose with a dark gray (light gray prior to New Horizons) outline along the top. The tips of her arms and legs are a darker black than the rest of her body.

Kiki has a normal personality. She is shy and caring, and may get upset easily and may tell the player to stay away from her, but she does not take it out on them. When she asks the player for favors, she often compliments the player's promptness (even if it actually takes a while). She may sometimes ask the player cooking-related questions, like how long to cook spaghetti until it's al dente or cheerfully telling other villagers of a recipe she once tried, with mixed responses from the different personality types.

She wakes up at 5:00 AM like other normal villagers, and may appear inside towards the middle of the day. She will enjoy partaking in the usual hobbies: bug catching, fishing, fossil hunting, and the others. She will also give her picture to the player (Wild World only) after talking to her frequently, telling the player's being "the best friend ever." She may mention an unseen friend called Moppina, an imaginary friend which comes from her hygiene and cleanliness concerns. Moppina is mentioned only in Wild World. Kiki will get on well with peppy and jock villagers, appearing motherly and sisterly towards them. She may become upset when talking to a cranky villager, due to their cruel nature which makes them appear rude when talking about other villagers.

Despite Kiki's official artwork depicting her wearing the dapper shirt, she wears the argyle knit in-game.

Hang in there, kiddo. 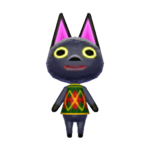 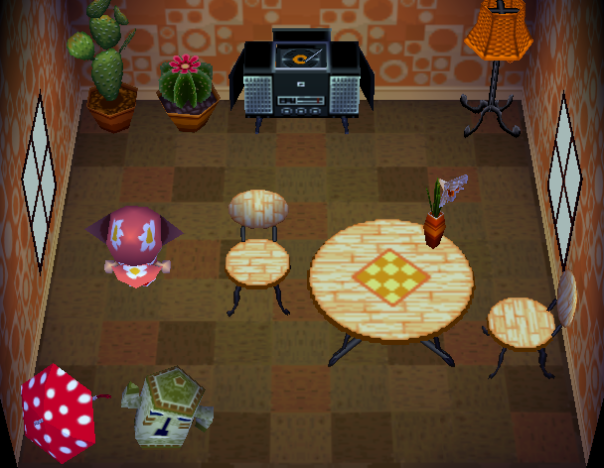 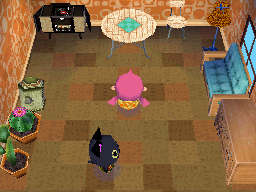 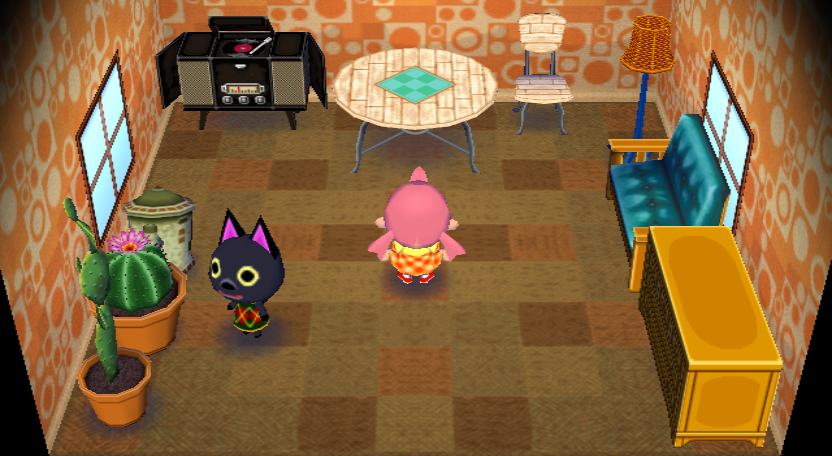 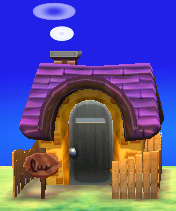 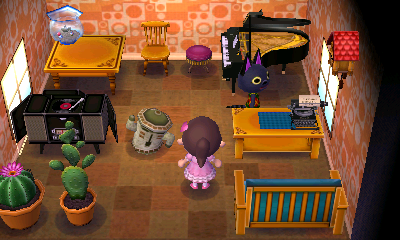 In Animal Crossing: New Horizons, if Kiki is one of the villagers who moved in during the main storyline after the villager house development quest, her house will have a combination of non-craftable furniture, plus items crafted by players during the island development storyline, primarily from the Wooden Series. She cannot have her initial house interior unless she moves out of the player's island or the Happy Home Paradise DLC is purchased, in which either the player or Isabelle can reset the interior. 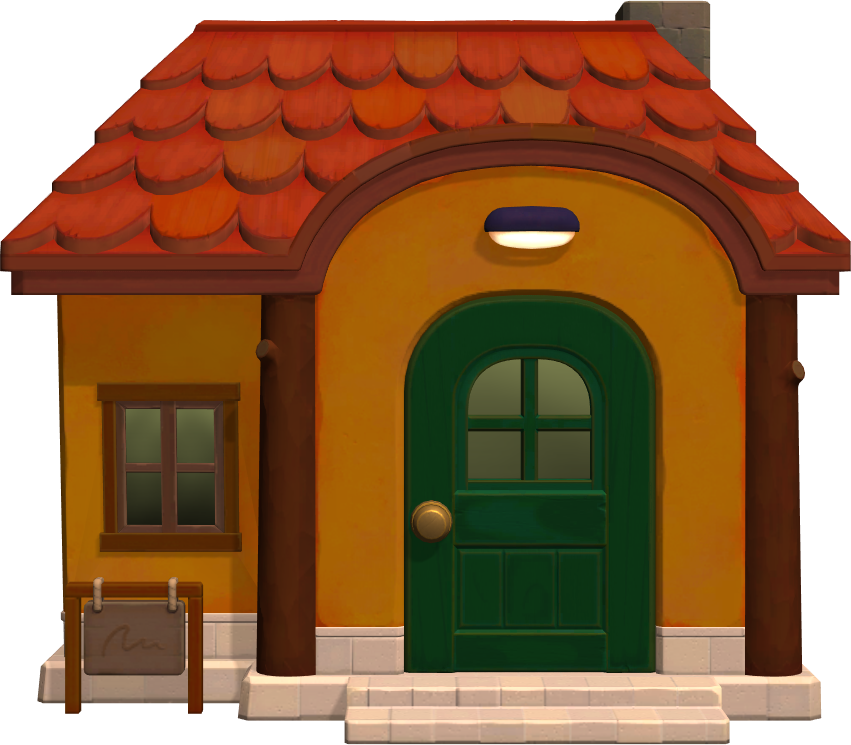 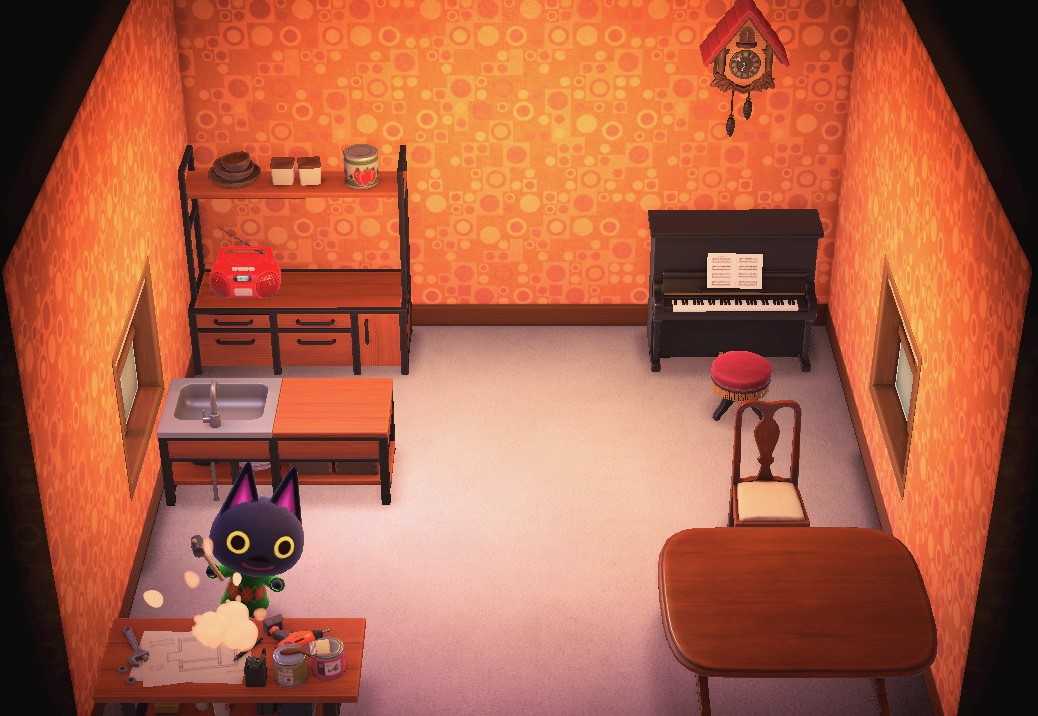 "They say the real joy in camping is in meeting new people along the way. But I just like s'mores."
— A Thought from Kiki, Animal Crossing: Pocket Camp (unused) 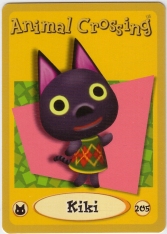 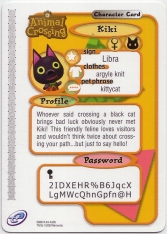 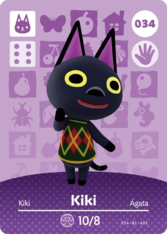