The ray is a sea fish in the Animal Crossing series introduced in Animal Crossing: City Folk. It can be found from 4 AM to 9 PM from late summer to late fall.

As with all fish in the Animal Crossing series, the ray can be donated to the museum by talking to Blathers, who will give a small talk about it. It can be found in the back sea tank, with other sea fish.

"Many theorize that rays are distant relatives to the sharks... But unlike their fearsome theoretical cousins, rays, with their little grins, are simply adorable, wot wot!"

After donating a ray to Blathers, it will appear in the section for fish and sea creatures, specifically in the top-right most tank in the north-eastern room.

"Beating their large fins up and down to move through the water almost gives rays the impression of flying. If viewed from below, rays appear to have their mouths curled up into a sort of smile. Some varieties have poisonous spikes at the base of their long tail fins that can be fatal to humans. This, combined with the ability to hide in sand at the bottom of the sea, can make them very dangerous."

"The ray is an unusually shaped fish with a flat body and a long body, somewhat related to sharks. Seen from the bottom, the mouth on its stomach appears to be smiling, which is objectively adorable. But be cautious—unlike most cute animals, some rays are extremely venomous. BEWARE THE SMILE."

During a Fishing Tourney, when given a ray, Chip will say the following dialogue.

"The secret to cooking a ray is not overcooking it. It needs to be light and flaky! Nyuuuk nyuk nyuk nyuk!"

"When you're talking rays, stewing or deep frying is OK, but sashimi is totally where it's at! Of course, I'm just eating this fishy the way nature cooked him: RAW! Nyuk nyuk nyuk! YUM!" 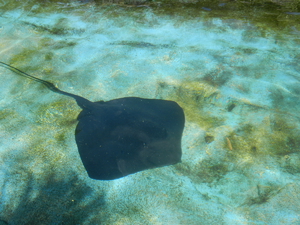 The red stingray is one of over 600 species of rays in the world. This ray is from the waters of Asia, where it favors shallow waters. Like most rays, it is a saltwater creature although it has been known to inhabit brackish waters. The red stingray gets its name from its bright orange-red underside and other orange markings that can appear on the creature. In Japan, it is valued as a food-source...which unfortunately has caused it to go to "near threatened" status.