The red snapper (タイ, Tai) is an uncommon fish found in the sea, which sells for 3,000 Bells. It can be found all year round.

"I caught a red snapper! That was a snap! (I really have to stop saying things like that.)"

In New Leaf, red snappers are used for the Fish Salad, Soup de Poisson and Red Snapper Poele recipes for the Harvest Festival.

"I caught a red snapper! I just snapped it up!"

In New Horizons, a red snapper can be used as an ingredient for Franklin to cook the Fish Meunière dish on Turkey Day.

"I caught a red snapper! It looks pretty dapper!"

Red snapper is used as a cooking ingredient in the cooking recipes for the following items:

The Red Snapper can be donated to the museum by talking to Blathers, who will tell the player some information about the donation:

"Snaptacular! Snaptastic! Sna... Er, snap... That is... Oh, bother! It wasn't particularly funny anyway. Please attempt to ignore my sorry lack of humor. Despite it, we will treat this fish with much care."

"Relatively few places serve red snapper, but... ...I actually understand why. It's rather dry, and not at all flavorful, eh wot?"

"Hoo, magnificent! Fine job, snapping up a red snapper! ...Hoo now? You didn't find that uproariously funny? In any case, right near the gills of this fish is a bone that actually looks just like the fish itself... Some cultures believe keeping one of these on you brings good luck. Good luck is a snap! Hoo!"

After donating the red snapper, the plaque near its aquarium will display the following information:

"Red snappers are gregarious fish that often form schools close to reefs and shipwrecks. They are a prized food fish, but because of demand, other species are often served as "red snapper." They usually live up to 50 years. The oldest recorded red snapper was thought to be 57."

It can be found in the sea tank in the northeastern room of the fish and sea creatures section.

"Red snapper is the common name of dozens of fish species, and I wonder why it is so popular. Are there so many types of fish that are both a shade of red and have a tendency to snap? Where there no other names? What about 'burgundy biter'? 'Garnet grasper'? 'Puce pincher'?"

The red snapper can be found in the tunnel sea fish tank in the aquarium.

During a Fishing Tourney, when given a red snapper, Chip will say the following dialogue.

"You know, you really cannot go wrong with red snapper. Oh, hey, try throwing them in a casserole! I mean, I'm just gonna eat this raw, but it's something to think about when you're making dinner! YUM!" 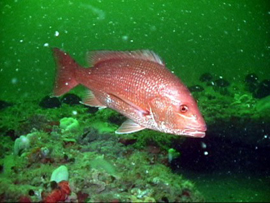 The red snapper, or Lutjanus campechanus, is a type of reef fish found in the Gulf of Mexico. It is Latin American and original name is Pargo, which some people may recognize it as. They can be caught up to 90 m (300 ft) below the surface of the water, and prefer to swim near the bottom in reefs, ridges, and even offshore oil rigs and shipwrecks! It shares its looks with other snapper fish, with the sloped profile of its body (between the mouth to the top of its head). However, it lacks prominent upper canine teeth found in other snapper fish but has sharp, needle like teeth in their place. They are a commercial fish as well as a recreational fish, making it somewhat overfished. This is reflected in red snapper sales in the US, which most are in fact different species of snapper fish, just mislabeled. It can live up to 50 years of age.