"I caught a Napoleonfish! Look at the hat on this guy!"

"I caught a Napoleonfish! Viva la me!"

In Animal Crossing: New Horizons, the Napoleonfish is a lucky item during summer, meaning it gives a 777-point Happy Home Academy bonus when placed in the player's house.

"I caught a Napoleonfish! It's not as big as it thinks!"

Upon donating the Napoleonfish to the museum, Blathers will comment dialogue.

"Hoo, my good gracious! What size! What majesty! What impact this fish has! When fully grown, the body of this fish can reach a length of over 80 inches, eh wot? The beady eyes and pouty mouth make it appear a bit dull witted...which I find rather charming!"

The Napoleonfish can be found lazing around near the bottom of the sea fish tank at the back of the fish exhibit.

The exhibit has this to say about the Napoleonfish:

"Called Napoleonfish, these fish also have the more accurate name of humphead wrasse. The true name comes from the distinctive humps on their heads. But "Napoleonfish" is more popular. When small, all Napoleonfish are females, but some become males as they age and their humps grow. Their bodies also turn a bluer shade as they mature and become males, making identification simple. Their bulky bodies, which can get to about six feet long, still glide easily through warm tropical waters. Finding these fish is a real treat for divers, as they're stunning to see-- and it's a great story to tell."

"Quite the catch you've brought! The stately and debonair Napoleonfish is truly something to behold. Those beady eyes! That bumpy head! That bold blue-green coloring! Alas, this quirky creature is quite endangered due to a variety of factors. Needless to say, we must do our very best to take care of our lumpy friend and its environment."

Once donated, the Napoleonfish can be seen in the coral reef tank with the clown fish and butterfly fish.

During a Fishing Tourney, when given a Napoleonfish, Chip will say the following dialogue.

"My buddy makes a paella with Napoleonfish-- and it's won AWARDS! Nyuuuk nyuk nyuk nyuk!"

"Now Napoleonfish, those are really made to be sautéed with garlic. But I'll just eat this guy raw. You know, whatever works fine for me when it comes to fish! YUM!" 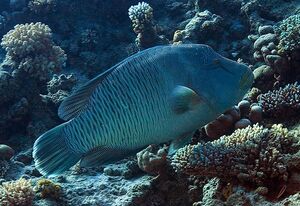 The Napoleonfish, Cheilinus undulatus, is more commonly known as the humphead wrasse; both names are derived from the large hump on the forehead of adults. Males are larger than females. Due to overfishing and the destruction of coral reefs, their natural habitats, the fish is now considered endangered. Humphead wrasses are protogynous hermaphrodites: all fish are born female, but contain the genes for both sexes, and some fish change sex to male a year or two after sexual maturity.