The giant snakehead[nb 1] is a river fish in the Animal Crossing series introduced in Doubutsu no Mori.

"I caught a giant snakehead! ACK! It's got a huge head!"

"I caught a giant snakehead! No puny snakeheads for me!"

"I caught a giant snakehead! But where's the rest of the snake?"

"I caught a giant snakehead! Um...but I asked for a medium?"

Upon the players' donating the snakehead to the museum, Blathers says the following:

"What a stupendous beast! It must have taken great effort to land this fearsome creature, eh wot? I've heard that giant snakehead carry parasites. Be sure to throughly cook them before eating. Blech! Parasites! Of course, we'll accept this one. Have no worries, we'll take special care of it."

"I firmly believe the best way to prepare a fish is the way the locals do it... Based on that philosophy chili-pepper flakes are a must with giant snakehead! And if you notice one shaking chili flakes on YOU, might I suggest fleeing?"

"...What a giant snakehead! These fish are notorious for their tremendous appetites, eh wot? Much like a snake, once one of these grabs its prey, naught can convince it to let go... I should think a few well-placed owl kicks might convince it, should one ever take a liking to me! In any case, this fish doesn't hunt all year 'round. It hates the cold and hibernates through winter. I've come up with a smashing nickname for it... "The Scourge of Summer!" Marvelous, eh wot?"

After its donation, the giant snakehead can be found in the big, left-hand fish tank with other river fish.

"Giant snakeheads get their name from the fact that their heads look like those of snakes. Their scales and patterns also look like snakes', really bringing the resemblance to a high degree. They have sharp teeth, so don't poke your finger anywhere near their mouths! Both males and females are well known for protecting their eggs and offspring. They will scare off any other fish that approach by frantically waving their tails."

"The giant snakehead is quite a sight to behold, wot! One glance conjures up visions of its namesake. This resilient creature can even find a home in the mud, where it is able to breathe. As a matter of fact, it dislikes cold weather, so during wintertime the mud serves as its temporary home. I hear that they eat anything that swims past their head. While odd, I feel a sense of owlship with them."

After its donation, the giant snakehead can be found in the recessed tank in the freshwater room in the aquarium.

During a Fishing Tourney, when given a giant snakehead, Chip will say the following dialogue.

"Hey, listen. I recommend frying giant snakehead in peanut oil. Delish! You can't beat that idea! OK, well, me, I'm just gonna scarf it down raw, of course! You still get the picture, though. YUM!" 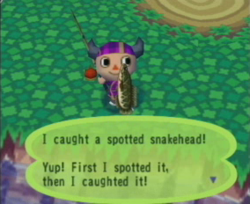 The player catching a spotted snakehead in Animal Crossing, as seen in a prerelease trailer.

The giant snakehead is the largest in the family Channidae, capable of growing to over one meter in length (three feet) and a weight of over 20 kilograms (40 pounds). They are predators, and they can consume organisms ranging from small fish to other snakeheads.