"I caught a koi! Whoever colored it did a really good job!"

In Animal Crossing: New Horizons, the koi is a lucky item, meaning it gives a 777-point Happy Home Academy bonus when placed in the player's house.

As with all fish in the Animal Crossing series, the koi can be donated to the museum, followed by a small talk by Blathers about it.

"Some fish bring a higher price at the market than koi, but koi are special in some indescribable way... For whatever the reason, catching a koi feels like... like catching a living fortune, somehow. Interesting, that. Well, aren't I incoherent! All rambling aside, rest easy knowing we will give this noble fish the utmost care."

"Hoo my! This addition should improve attendance at the museum most dramatically! I suspect that with the addition of this marvelous koi to the collection, folks from all around <town name> will be flocking to see it, wot wot!"

"...Great hoo! One of these should liven up the museum nicely, that's for certain! I say, I've heard a koi's worth is determined by how flashy its coloring is... Hoo now... How many Bells might this one be worth? ...Hoo, compose yourself, Blathers. This is for the museum!"

The Koi can be found in the middle-left tank, with other fresh-water river fish.

Once the koi is donated, there is information on the board in front of the tank that houses it.

"Though typically pale in color, these aquarium fish also can be found with rather beautiful patterns. This is all thanks to very selective breeding of carp with genetic mutations, allowing for diversity. No two koi have the exact same pattern and are popularly known as "swimming jewels" as a result. They can be sold for a very high price, depending on their coloring and pattern. If properly cared for, they can live for over 100 years, making them a staple for outdoor garden ponds."

"Koi are a variety of carp bred for their color mutations...starting more than a thousand years ago! Well, one glance at their impressive coloring tells you that the centuries of effort were worth it. And even today people still selectively breed koi in search of new color combinations! One marvels at the thought of what the koi may look like in another thousand years."

The koi can be found in the recessed tank in the freshwater room in the aquarium with the carp, as well as in the river near the waterfall in the main bug exhibit and the fountain in the butterfly room in the bug exhibit.

During a Fishing Tourney, when given a koi, Chip will say the following dialogue.

"All the same, a little soy sauce and sugar on that koi equals an instant win! Nyuuuk nyuk nyuk nyuk!"

"Now for koi. I guess most people don't really eat 'em, but they're real good in a nice stew. But I'm not most people, so I have no problem just eatin' them up. I'll even have 'em raw! YUM!" 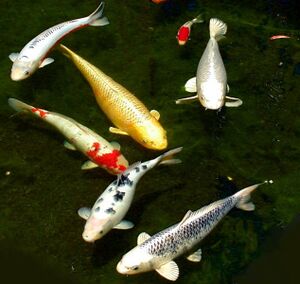 The koi is an ornamental fish of the common carp variety, or Cyprinus carpio. They are found usually in private and public aquariums and they are bred mainly for decoration. Much as the goldfish, the koi is also interbred from specially selected carp. Unlike the goldfish however, they have a common body shape, but with different colors (the opposite of goldfish). They are omnivores, feeding mainly on insects and algae. The name koi comes from the Japanese コイ, pertaining to the common carp—the Japanese term for koi is nishigikoi (錦鯉), which literally means "brocaded carp".