The Tadpole (オタマジャクシ, Otamajakushi) is a fish (technically an amphibian) introduced in Animal Crossing: New Leaf. It lives in ponds, sharing its spot with Crawfish, Killifish, and Frogs. They sell for only 100 Bells, making them the cheapest fish in the game. It is unspecified what species of frog the Tadpoles are, but they are assumed to be the same species as the Frogs are.

Upon donation to the museum, the information board in front of the tank that houses the Tadpole says the following:

"Tadpoles are nothing more than baby frogs and generally inhabit ponds and streams. Their round heads and quirky style of movement give them a different kind of cuteness from adult frogs. They become more frog-like when they eventually grow legs and start to lose their tails. Unlike fish, though, their skin is very delicate because they do not have scales, so handle carefully."

"Undoubtedly you know that tadpoles eventually turn into frogs. I must say, I find them impossibly adorable with their squiggly little tails. But even cuter... when they sprout legs! Why, we can witness accelerated evolution in these squirmy little ones. Hoo, it makes me so emotional!"

The Tadpole can be found in the open, recessed tank in the freshwater fish room in the museum, beneath the Frog. 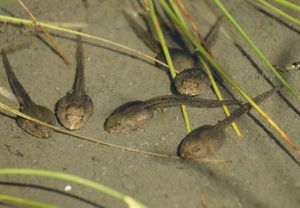 Tadpoles are frogs in their larval stage. They have no arms or legs until adulthood and usually live underwater.