The angelfish[nb 1] is a freshwater fish in the Animal Crossing series introduced in Doubutsu no Mori.

"I caught an angelfish! It looks divine!"

"I caught an angelfish! How heavenly!"

"I caught an angelfish! Where's its halo?"

"I caught an angelfish! Now where's its harp?"

"I caught an angelfish! That other fish told me to do it!"

As with all fish caught in the Animal Crossing series, the angelfish can be donated to the museum. Blathers will also give some information on it.

Blathers will say this upon donation to the museum:

"Gorgeous. Sim-ply gorgeuous. Heavenly, even. We will treasure your gift. I give you my word as an honest, upstanding owl."

It is found in the bottom-right tank, grouped with other rare fish.

It can be found in the second tank after donating it to museum. Upon donation, Blathers the curator will say this:

"The angelfish is called the queen of tropical fish, and quite rightly so, eh wot! Indeed, this one should bring a ray of sunshine to this dusty old museum! However serene these fish may look, they're actually rather feisty...Every rose has its thorn, isn't that what they say?"

It is found in the second tank in the aquarium after donation.

Blathers the curator will say this dialogue.

"The distinctive shape of the angelfish lets it appear larger than it actually is. ...It's quite beautiful, and though it is a tropical fish, it has many tricks for staying alive, eh wot? Those skills make it far more resilient than other, pampered tropical fish. Perhaps this fact is what earned the angelfish the title "Tropical Fish Queen."

It can be found in the bottom-left tank with other small river fish.

An information board in the aquarium will display this description of an Angelfish after donation:

"These tropical fish move very gracefully because of long fins on their backs and underbellies. Males and females are almost impossible to tell apart, making identification tricky. They lay eggs among water plants. Both genders look after the babies while they cling to weeds. The young look like any other fish, but they gain their angelfish looks once they leave the weeds."

"The angelfish is truly a beautiful creature. Just look at the elegance of those fins! Despite the name, however, these lovelies are known to be rather aggressive. They've no qualms about relentlessly pursuing fish much smaller than themselves! Why, they even attack their own kin! It seems no fish is safe around these "angelic" bullies. It makes one wonder who comes up with these names. Appearances— and names— can be deceiving."

Once donated to the museum the angelfish can be found in the small fish tank in the entrance of the first exhibit room with the killifish and goldfish.

During a Fishing Tourney, when given a angelfish, Chip will say the following dialogue.

"I've never tried it, but I'll bet dried angelfish tastes pretty close to jerky. Just a theory, of course. Right now I'm just gonna eat it raw to save myself some time. YUM!" 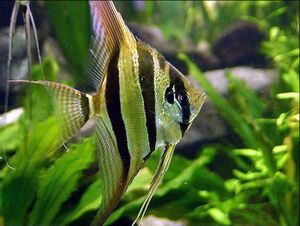 The Pterophyllum altum, or Altum Angelfish, as they are also known, grow larger than how they are represented in the game, in fact reaching over 50 cm in the wild (the size of a small barred knifejaw). It originates from South America, in the river basins of the Amazon River, Orinoco River, and Essequibo Rivers. They are ambush predators, meaning they hide behind roots and attack on small fish when they least suspect it. Their small bodies and striped coloration makes it easy for them to hide. They are monogamous, which means they only have one partner throughout their lifetime with which they lay eggs. It likes weak acidic water, with a pH of about 4.5 to 6.