A variant of the arowana, the ivory arowana, appears exclusively in Animal Crossing: Pocket Camp as an event fish.

"I caught an arowana! It's the golden dragon fish! I wonder what it's worth..."

"I caught an arowana! It's golden and beautiful!"

In New Leaf, an arowana appears as part of the default furniture layout for Quillson.

As with all fish caught in the Animal Crossing series, the arowana can be donated to the museum in each game by talking to Blathers, who also will give some information on it.

An information board in the aquarium will display this description of the arowana:

"It would seem your angling expertise knows no bounds! This beauteous arowana fetches a pretty Bell, though I'd venture to say that its true price is beyond measure. The arowana is an excellent jumper. Some have been seen leaping six feet out of the water, eh wot! Alas, it has also been on the endangered-species list for some time. It's up to us to do all we can to help preserve such magnificent creatures for the years to come."

The arowana can be found in the jungle tank in the far right of the first exhibit room with the saddled bichir and arapaima.

During a Fishing Tourney, when given an arowana, Chip will say the following dialogue.

"What do I recommend? An arowana burger and a tall glass of iced chowder! Nyuuuk nyuk nyuk nyuk!"

"Now arowana, that'll make for some fine sashimi! You know how to make good sashimi? No? You should learn! Well, I'm just gonna scarf it raw, as you'd expect. Here goes! YUM!" 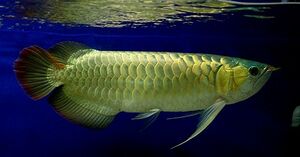 Arowanas, also known as aruanas or arawanas, are a freshwater fish of the family Osteoglossidae, sometimes known as "bonytongues". They can obtain oxygen from the air by sucking it into their swim bladder, which is lined with capillaries akin to lung tissue. In aquariums, Arowanas tend to school in groups of five to eight; any fewer may show an excess of dominance and aggression. Osteoglossids are basal (primitive) fish from the lower Tertiary and are placed in the actinopterygiid order Osteoglossiformes. There are ten described living species: three from South America, one from Africa, four from Asia, and the remaining two from Australia. Osteoglossidae is the only exclusively freshwater fish family found on both sides of the Wallace Line. This may be explained by the fact that Asian arowanas (S. formosus) diverged from the Australian Scleropages, S. jardinii and S. leichardti, about 140 million years ago, making it likely that Asian arowanas were carried to Asia on the Indian subcontinent.