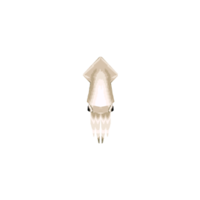 Squid can be donated to the museum: when given to Blathers, he will briefly talk.

"Octopus and squid both have ink, and I've seen squid ink in recipes quite often... Strangely, however, I've never heard of a dish that uses octupus ink! I suppose it's partially due to the fact that octopi produce very little ink... What ink they DO make is watery and ill-suited for cooking, as well... That said, I've heard that the flavor is not at all repugnant, eh wot? Perhaps an octopus-ink pasta wouldn't be bad..."

After being given to the museum, the Squid will appear in the sea tank of the aquarium, propelling itself around towards the back.

The information board in front of the tank that houses the Squid says the following:

"People assume squids have legs, but those are actually arms. There are 10 in all; two are used to grab prey. To swim, they twist their fins and expel water from inside their bodies to allow for fluid motion. The ink they shoot when threatened forms into the shape of a squid, acting as a sort of body double."

"Well, first off, squids are members of the mollusk family, just like the octopus. Many mollusks like snails and clams have shells, but the squid's body is almost completely soft. The exception is a long, narrow bit of hard material going through its main body-the last remnant of its shell. Of course, having your shell INSIDE is not a best practice. Perhaps they lost the owner's manual! - Blathers upon donation

Chip will say the following when given a Squid during a Fishing Tourney:

"A great thing to try with a squid is drying it overnight. Delicious, even with all those tentacles and suckers! Not that I have the patience to wait that long, of course. I'm getting the urge to snack!"

The exact type of squid in the Animal Crossing series is not known but judging by the City Folk's description, it may be a European squid which is white with two long arms. The family name, 'Loliginidae' is commonly referred to as the inshore, calamari, and grass squid. Squids eat small plants, insects and small animals that float on the surface of the ocean.