The goldfish is a freshwater fish in the Animal Crossing series introduced in Doubutsu no Mori. It has a tiny shadow size and can be found in rivers in games prior to Animal Crossing: New Horizons, and in ponds in New Horizons. Unlike most fish, the goldfish appears as a bag or bowl rather than a tank when placed in the player's house.

"I caught a goldfish! It's worth its weight in...fish. Great."

"I caught a goldfish! Worth its weight in...fish!"

"I caught a goldfish! There's gold in them there fish! (Not really.)"

"I caught a goldfish! It's worth its weight in gold!"

"I caught a goldfish! It's worth its weight in fish!"

As with all fish and bugs in the Animal Crossing series, the goldfish can be donated to the museum by talking to Blathers, who will tell the player a little bit about the donation.

As a Goldfish is donated, Blathers will say this:

This is Blathers's speech about the newly donated fish:

"Hoo, in my youth, I once had a goldfish in my room. His name was Sir Blithers. Goldfish are actually quite sociable creatures, eh wot? At least they are when they're being fed, that is. Who can resist them?"

It appears in the first tank in the aquarium.

Blathers will say this when handed the fish in the museum dialogue.

"Hoo now... Do you know how large goldfish can get? Well, they can grow up to... ONE FOOT (30 centimeters) LONG! The growth of a goldfish in a tank is inhibited by tank size, so you rarely see them that big, I'd imagine. Even so, our tanks here at the museum are spacious... so expect our new goldfish to make a BIG splash! ...Hoo now? Not at all funny, you say?"

It can be found in the small tube-tank in the aquarium.

Upon donation to the museum, the information board in front of the tank that houses the goldfish says the following:

"These are aquarium fish that came about by selectively breeding types of crucian carp. It took hundreds of years to get the long tail fin and beautiful color of the current breed. Even red goldfish are black when they are young and still retain other vestiges of the crucian carp. They turn red as they grow, thus gaining their much more commonly known look."

"Goldfish are so cute and delicate... but do you know how big they can get? Why, they can grow up to... a foot in length! Well, sometimes. The size of the tank they're kept in tends to restrict their growth. And just how big will this goldfish get in our large museum tank? I look forward to finding out!"

The goldfish can be found in the tank immediately to the right of the entrance to the fish section of the museum sharing it with the pop-eyed goldfish.

During a Fishing Tourney, when given a goldfish, Chip will say the following dialogue.

"A little factual tidbit for ya: nobody scoops goldfish like me! In my opinion. Nyuuuk nyuk nyuk nyuk!"

"You know, I'm pretty good when it comes to scooping goldfish, if I do say so myself. And I do. OK... Umm, hey, close your eyes for a second or two, would ya? YUM!" 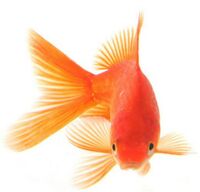 This goldfish is the Fantail breed. It has two fins instead of one. It has an egg shaped body, a high dorsal fin, but no shoulder hump. It is the western variation of the Ryukin breed. They do not like cold water. These, like all goldfish, are commonly kept as pets, and prefer a water temperature of 13 - 21 degrees Celsius/Centigrade.