The bluegill is a river fish in the Animal Crossing series that appears in all games. It appears from 9 AM to 4 PM year-round, and it sells for 180 Bells beginning in Animal Crossing: New Horizons.

"I caught a bluegill! Don't worry! I caught the rest of the fish, too!"

"I caught a bluegill! Why is this little guy so sad?"

"I caught a bluegill! Now that takes some skill!"

"I caught a bluegill! There's a lot in this ville!"

"I caught a bluegill! Do you think it calls me "pinklung"?"

Blathers will give a speech on the bluegill when it is donated to the museum:

"Bluegills are a type of whitefish and they are most definitely edible, wot! Even so, I would avoid the skinny ones. They look rather full of bones..."

"...Ah, hoo, the bluegill, scourge of fishermen everywhere. Once introduced to an area, this fish will eat up many of the indigenous breeds, eh wot? But with a face like that, it's hard to believe our wee fishy friend here has any bad intentions..."

Blathers gives no specific speeches once the bluegill is donated, but he posts a description for it.

"Bluegills have spikes on their dorsal fins to help protect them from enemies and harm. Their offspring actually have a fairly high survival rate when compared to other fish. The males chase away the females and take over protecting the eggs and babies in the nest. Although bluegills are small, they are actually related quite closely to the black bass."

"The bluegill is incredibly common. A bit too common, depending upon where you are. They eat anything that fits in their mouths and are highly adaptable. The bane of fishermen in some areas, bluegill is often the only fish to be caught! But looking in its wee beady eyes, I must say I see no ill will in it..."

Once donated to the museum, the bluegill can be found in the recessed tank in the main exhibit room with the black bass and koi.

During a Fishing Tourney, when given a bluegill, Chip will say the following dialogue.

"Bluegills are definitely the sort of fish you wanna deep fry. No doubt! With some warm bread on the side... Or, you know, just slurp 'em down raw like I do. YUM!" 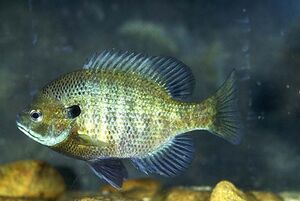 Of tropical sunfish body shape, the bluegill's most notable feature is the blue or black "ear", actually an extension of the gill cover called the opercular flap. Its name, however, comes from the bright blue edging visible on its gill rakers. Also called the bream, this fish tastes nice. It is very common and often fished. Catfish, bass and turtles prey on the bluegill.