The dab (カレイ, Karei) is a sea fish in the Animal Crossing series introduced in Doubutsu no Mori e+. It is very similar in appearance to the Olive Flounder, another saltwater fish, which is even confused with the Dab by the player in its catch quotes in Wild World and New Leaf.

In New Leaf, the dab is used in the Dab Meunière recipe for the Harvest Festival.

"I caught a dab! I'm not just dabbling anymore!"

In New Horizons, a dab can be used as an ingredient for Franklin to cook the Fish Meunière dish on Turkey Day in the northern hemisphere.

Dab is used as a cooking ingredient in the cooking recipes for the following items:

As with all fish and bugs in the Animal Crossing series, the dab can be donated to the museum by talking to Blathers, the curator. When donating, Blathers will tell the player a little bit about the donation. Below is what he has to say in each game.

When a dab is donated, Blathers will say this:

"Dabs and flounders might look alike, but the way to eat them differs, eh wot? Dab is better simmered in sauce or sauteed, while flounder is better raw. It goes to show, the palate is more discriminating than the eye..."

When a dab is donated, Blathers will say this:

"By the by... Just so you know, eyes on a dab are positioned on the right, but on the left on a flounder. When young, these fish are shaped like ordinary fish, but... As they mature, they start becoming flatter in preparation for adulthood! What professionalism! You can tell this is a very responsible fish, wot?"

The dab can be found in the tank at the back of the room, with other sea fish.

Upon donation to the museum, the information board in front of the tank that houses the dab says:

"Dabs generally have both eyes on the right side of their body, though there are some exceptions. Both types of dabs begin in infancy with an eye on each side of their body. As dabs grow, the eye on the left migrates to the right, though sometimes it doesn't move at all. Dabs dig in the sand to hide, which allows their eyes to stick up a bit to watch for danger. Because they live off of bugs and small creatures, their mouths are small, containing narrow, dull teeth."

"The dab is a flatfish that bears some resemblance to the olive flounder, though their mouths are different. Personally, I am morbidly fascinated by each fish's eye placement. The dab's eyes are both on its right side, while the olive flounder's are on the left. These fish spend lots of time lying on their sides in the sand, so the odd eye placement makes some sense... But it's-how can I put this? Creepy? Viscerally disturbing? Profoundly upsetting to fans of symmetry?"

During a Fishing Tourney, when given a dab, Chip will say the following dialogue. 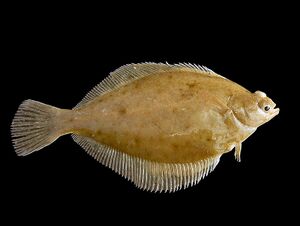 The common dab is the smallest flatfish in the world. It can be found on sandy seabeds, most commonly in the North Sea off the east coast of England.