The dorado (ドラド) is freshwater fish in the Animal Crossing series introduced in Animal Crossing: Wild World. It is tied with the stringfish as the most valuable freshwater fish, selling for 15,000 Bells. The name dorado comes from the Spanish word for "golden", which reflects the fish's color.

"Whoa! A golden fish. I think this is a dorado! Who knew they lived here!?"

"I caught a dorado! I should make that my motto!"

Upon the player's donation to the museum, Blathers will comment on it:

"Hoo my! Congratulations are in order! You've finally caught one, eh wot? Did the mighty dorado put up a good scrum? You've passed the test! You're initiated into the secret club of fisher folk!"

Upon the player's donation to the museum, Blathers will comment on it dialogue.

"My hoo, I never dreamed someone in this town would hook a dorado! It's a fish that lives up to the image of El Dorado it conjures... I could gaze upon it all day!"

"Dorado means "golden" in Spanish. As the name would indicate, these fish are gold and have black dots. They look like salmon but are very toothy, carnivorous, and related to piranha. They're such ferocious fish that other fish regularly flee from them, fearful of becoming a snack. Their ferocious nature and power make them a prize catch among anglers."

"Woo-hoo! So shiny! This massive fish's name, dorado, means "golden" in Spanish—a fitting title. They are also quite valuable, I understand. I congratulate you on your top-notch angling! They are rather large, eh wot? It makes one wonder what all they might feed on... Fowl, perhaps?! One quivers at the very thought! Well, it'll be safe behind glass, no doubt. Quite safe, hoo..."

The dorado can be found in the large tank in the back of the first room of the fish exhibit area.

During a Fishing Tourney, when given a dorado, Chip will say the following dialogue.

"Now dorado, that's a fish you will really want to fry. Most definitely, frying is the best way to cook it. That said, there's nothing wrong with raw either. No, sir! YUM!" 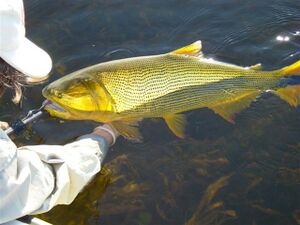 Dorado is Spanish for golden, which reflects the color of the fish. In real life, it is frequently confused with the mahi-mahi, which is also called the dorado. The two real life species of "freshwater" dorado are Salminus maxillosus and Salminus hilarii. This fish can be found in the rivers of South America, most notably the Paraná River basin in Argentina and Brazil.