The Mahi-Mahi (pronounced ɑː|h|iː|ˈ|m|ɑː|h|i, "ma-hee-'-ma-hee") is a sea fish in the Animal Crossing series, introduced in Animal Crossing: New Horizons, where it can be found exclusively at the pier. It also appears in Animal Crossing: Pocket Camp as an event fish that was available for a limited time during Fishing Tourney: Fintastic, from November 12 to November 19, 2020.

"I caught a mahi-mahi! It's all mahine-mahine."

As with all fish in the Animal Crossing series, the Mahi-Mahi can be donated to the museum, followed by a small talk by Blathers about it.

"The mahi-mahi is an ocean fish known for its wide, somewhat-cute face. It can reach over six feet long. It is known by many different names including "dolphinfish," even though it has no relation to dolphins. They live only in warm, tropical waters...which perhaps explains the relaxed, happy look on their faces."

Once donated, the mahi-mahi can be found in the north-east room of the fish exhibit, in the large central tank with the porthole windows. It will often swim near the glass wall, and sometimes will try to pierce the Anchovy school, scattering them for a moment - it shares this behavior with many of the large fish also in this tank. 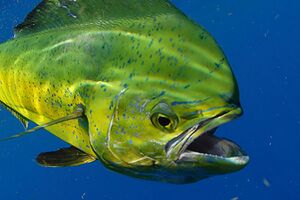 Mahi-mahi, also referred to as the common dolphinfish is a surface-dwelling ray-finned fish found in off-shore temperate, tropical, and subtropical waters worldwide. It is one of two members of the family Coryphaenidae, alongside the pompano dolphinfish. These fish are most commonly found in the waters around the Gulf of Mexico, Costa Rica, and Hawaii.