"I caught a tuna! It's a little off-key!" —New Horizons

The Tuna (マグロ, Maguro) is a rare fish that can be found in the sea all day between November and March. The fish sells for an expensive 7,000 Bells at Tom Nook's store. The fish has a huge shadow size.

"I caught a tuna! And I'm not talking canned!" 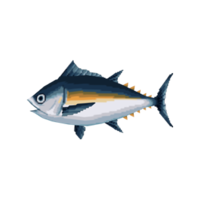 "I caught a tuna! I only wish I'd caught it soona!"

"I caught a tuna! And now it's stuck in my head"

Blathers will say this when the Tuna is donated to the museum: "If a tuna stops swimming, it will stop breathing and expire, eh wot? As you can imagine, this means that it must swim when it sleeps as well. I think every day about how marvelous life would be if I could work in my sleep!" One can find the Tuna in the back tank with the other sea fish.

Upon being donated to the museum, the Tuna can be found in the back tank with other sea fish. When given the fish, Blathers will say this: "If tuna stop swimming, they actually lose the ability to breathe and can perish! ...Which means that even while resting, this fish just keeps swimming, eh wot? I really prefer to focus on resting up rather than napping... Rather lucky I was born an owl, wot wot!"

The information board in front of the tank that holds the Tuna says the following:

Tuna can reach almost 10 feet (3 meters) in length and weigh over 800 pounds (360 kg), which is huge in the fish world. Combining this great size with their good flavor makes them literally the biggest catch for most anglers. Tuna can't breathe when they aren't moving, so their entire lives revolve around constantly swimming. To sleep, they merely slow down. This ability to swim while sleeping is a huge advantage. They're also rather fast, capable of beating both sets of fins so hard they reach speeds of 50 mph (80 km/h)."

"The tuna is a large ocean fish that can reach upwards of nine feet long. Besides its great size, it's notable for continuing to swin even when it's sleeping! Well, to be fair, if it doesn't keep swimming, it won't be able to breathe and will of course die... But sleep should be restful, eh wot! If I were the tuna I would feel very hard done by!"

When donated, the Tuna can be found in the north-east room of the fish exhibit, in the large central tank with the porthole windows. It shares this tank with the Anchovy, the Blue Marlin, and Horse Mackerel.

There are various types of tuna in existence. The type of tuna that appears in the Animal Crossing series appears to be a Northern bluefin tuna, judging by the overall shape and coloration of the body. As a result of its uses, it has become overfished, and because of its late maturity, it is increasingly difficult for it to reproduce to sustain the demand. It preys on squid, crustaceans, horse mackerel, sardines, and herring.