"I caught an ocean sunfish! Don't look directly at it!♪"

"I caught an ocean sunfish! My day is brighter already!"

Upon donation to the museum, Blathers will say the following:

"I understand that ocean sunfish are edible, but... I've also heard that unless it's incredibly fresh, it tastes rather foul. As such, it's usually only eaten where it's caught!"

The ocean sunfish will be found in the second room in the sea tank.

"...The ocean sunfish, it turns out, is related to the blowfish! Shocking, no? Absolutely mind-boggly! The resemblance is quite strong in its little mouth and round body... Seems rather blowfishy to me! ...There's something almost therapeutic about watching its slow, dull movements and vacant expression."

An information board in the aquarium displays a description of the ocean sunfish:

"Ocean Sunfish are a relative of blowfish that can reach up to two tons in weight. Lacking a tail fin, they cannot swim particularly quickly, which is an odd bit of anatomical detriment. The number of eggs they can lay is the most in the world at over 300 million. However, out of that 300 million, only one or two fish will ultimately survive. Ocean sunfish sometimes like to bob up and down on the surface of the ocean. This gives them the appearance they're sunbathing, which helps to make them a popular breed of fish."

"The ocean sunfish is a large relative of the blowfish with an unusual shape, like a fish head with a tail. They are a fairly relaxed species, often content to ride where the currents take them. This is fortunate as, otherwise, the sight of a large head coming toward you might be alarming!"

The ocean sunfish is found in the second exhibit, with the horse mackerel, the anchovy, the whale shark and the great white shark.

During a Fishing Tourney, when given a ocean sunfish, Chip will say the following dialogue.

"Let's see. The best way to cook an ocean sunfish is definitely tempura. Has to be! Tempura always works! Heck, swallowing this guy in a single gulp is pretty much off the table, even for me. Bummer!" 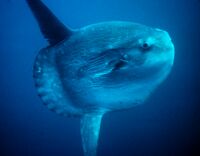 The ocean sunfish, Mola mola, is a tropical fish related to the puffer fish. It's the largest known bony fish, at up to 3.3m long and 4.2m tall, and weighing over 2 metric tons. When resting they will lay down on their side just below the ocean's surface in the sun, which is where they get their name. This behavior is believed to warm them, as prolonged exposure to waters below 12 °C (54 °F) can disorientate or even kill them.

Despite being classified as a bony fish, they have a skeleton largely comprised of cartilage, due to the sizes they reach. Like some other toothless bony fish, it has pharyngeal teeth, or teeth in its throat. Traditionally believed to feed primarily on jellyfish, they are now known to be generalist predators, also eating fish larvae, squid, crustaceans, and even eelgrass. Ocean sunfish are often victims of skin parasites, and they will invite small fish and even birds to clean their skin.