The Suckerfish is an uncommon fish introduced in Animal Crossing: New Horizons. It can be found in the sea between June and September in the Northern hemisphere and between December and March in the Southern Hemisphere. It can be found at any time of day, and it sells for 1,500 Bells.

"The suckerfish is a curious fish that likes to attach itself with its sucker mouth to larger marine animals. The benefit to the suckerfish is that it gets to eat smaller parasites and dead skin off the host's body. Amusingly, some people have used suckerfish on cords to catch large turtles with the fish's own suction! I imagine this practice is the cause of some awkward conversations between fish and turtle, eh wot?" 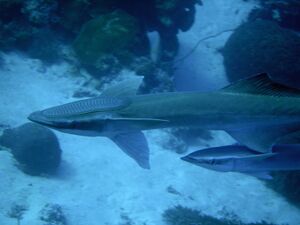 The Remora family possess distinctive first dorsal fins that take the form of a modified oval, sucker-like organ with slat-like structures that open and close to create suction and take a firm hold against the skin of larger marine animals. They spend their lives clinging to a host animal such as a whale, turtle, shark or ray. The remora and its host organism likely possess a mutualistic relationship as the remora can move around on the host, removing ectoparasites and loose flakes of skin, while benefiting from the protection provided by the host and the constant flow of water across its gills. Although it was initially believed that remoras fed off particulate matter from the host's meals, this has been shown to be false; in reality, their diets are composed primarily of host feces.