(Redirected from Gyroid (furniture))
This article is about the furniture items. For the species of characters, see Gyroid (species). For the character formerly known as Gyroid, see Lloid.

"Have you ever seen those Gyroids up on the stage at the club? It's weird, but I didn't actually put them there. They just appeared out of the blue one day. How bizarre!"
— Dr. Shrunk, Animal Crossing: New Leaf

A room full of different Gyroids in City Folk

Gyroids on the ground in New Leaf

Gyroids (はにわ, Haniwa) are furniture items in the Animal Crossing series, primarily used as furniture inside the player's house. They spawn randomly buried in the ground, like fossils, but only after rainy or snowy days—lazy villagers in New Leaf claim that they must like the rain.

The name "Gyroid" likely originates from the word "gyrate," meaning to spin, referencing the motion that Gyroids make.

Each and every Gyroid is unique in its own way: the way it sounds, how fast the tempo is, and pitch all depend on the size of the Gyroid and which family it belongs to. If one of K.K. Slider's songs is played on a stereo, the Gyroid will match the tempo of the song so that they synchronize.

In Doubutsu no Mori, Animal Crossing, and Doubutsu no Mori e+, Gyroids cannot be found in the acres that contain the player houses, the wishing well, the train station, the lake, or the dump.

In Animal Crossing: New Leaf, four Gyroids are present in Club LOL, and may be swapped out for other Gyroids; however, they may never be added to or taken.

A number of Gyroids may be active at a time before one of them automatically turns off:

In Animal Crossing: City Folk, upon befriending Brewster in The Roost, he will allow the player to store Gyroids with him, freeing up space from the player's storage. This is not available in other games.

There are 127 Gyroids available since Animal Crossing. The Brewstoid family was added in Animal Crossing: New Leaf, bringing the number to 131. Not all Gyroid families have all the sizes of Gyroids, and a few do not have a neutral size.

Alloids make a sound similar to a steel drum. Derived from "alloy," a metal made from two or more different metals.

Brewstoids make the sound of coffee pouring. They are non-obtainable prior to New Leaf. They resemble their creator, Brewster, and can be acquired only by working part-time at the Roost Cafe, and getting a certain number of customers' orders correct.

Dekkoids sound a little bit like they are saying "dekkai," meaning huge.

Dingloids, as their name suggests, make bell sounds. The Wee Dingloid is the only "Wee" Gyroid and is very similar to the Mini Dingloid, except it appears to have no mouth.

The Droploid makes a "plop, plop, plop" sound, like water falling. There is only one member of the Droploid family.

Fizzoids sound like the fizz of opening a pop bottle.

Gargloids sound like a man gargling water. Compare this to the Warbloids.

These sound like a gong. They closely resemble Lloid and the Gyroid from the original Animal Crossing.

Lamentoids are based on the word "lament," and make rattling sounds when they spin. They do not have the same facial features as most Gyroids do.

Lullaboids make a soothing sound akin to a music box.

Nebuloids sound like a vibrating beep. Derived from "nebula," a cloud of dust floating in space.

Oboids make a sound akin to an oboe.

Puffoids sound like a person blowing on a pan flute.

Rhythmoids are in tune with the music (prior to Animal Crossing: New Leaf).

Sproids make a noise similar to that of a spring.

Sputnoid, from the satellite Sputnik, make the noise of a spacecraft drifting through space. These Gyroids have metallic bodies and large, colorful panels.

Strumboids make sounds similar to a guitar, from the word "strumming."

Tootoids make a noise that sounds like flatulence. The Mega Tootoid has a higher pitch than the Tootoid, which is unusual for the Mega variant.

Warbloids sound like a woman gargling water. Compare this to the Gargloid family. 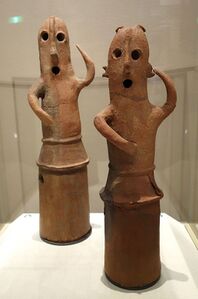