Baseball is a furniture item in Doubutsu no Mori+, Animal Crossing, and Doubutsu no Mori e+. It can be placed on the surface of tables and other similar furniture that have surfaces for items. The player can interact with this item to play Baseball.

Baseball can be obtained from Animal Island. It does not have any color for the purpose of fêng shui. This item is lucky, meaning it gives a 777-point Happy Room Academy bonus when placed in the player's house.

Baseball in Doubutsu no Mori+ 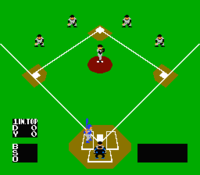 Baseball (ベースボール, Bēsubōru?) is a sports game originally released on the Famicom in Japan on December 7, 1983, and on the Nintendo Entertainment System in North America on October 18, 1985 and in Europe on September 1, 1986. An arcade version of the game, VS. Baseball, was released in 1984 for Japan and North America and in 1986 for Europe. It is a video game adaption of the real-life baseball sport.

Each game begins with the first team pitching a ball to the other team, who is adjacent to the pitching player. The adjacent player, referred to as the "Batter", must swing their bat in order to strike the ball back. If successful, the pitching team will attempt to catch the ball, which denotes how many bases the batter can run to, gaining one point after running from three bases back to the home base. If the ball goes out of the park or reaches a certain distance, a Home Run occurs, and all players currently stationed on a base will automatically run to Home Base, gaining a substantial amount of points. Alternatively, if the batter fails to hit the ball, they will receive a strike, and if they gain three strikes, the batter is out of the game. When three batters are given outs, the teams switch roles, and the process repeats.

Baseball on other wikis