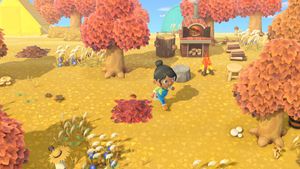 An island in Animal Crossing: New Horizons during fall with mushrooms growing by the trees.

Five mushrooms will appear per day until a limit of 30 is reached, after which new ones will stop growing. They do not appear on mystery islands.