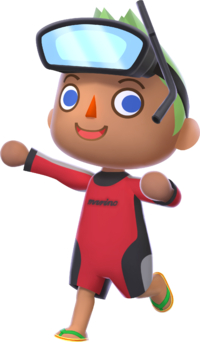 Artwork of a player in a wet suit from Animal Crossing: New Leaf

A wet suit is a clothing item introduced in Animal Crossing: New Leaf. It allows the player to go swimming in the sea and catch sea creatures.

Wet suits, along with diving and sea creatures, were added in Animal Crossing: New Horizons in Wave 1 of the Free Summer Update.

In Animal Crossing: New Leaf, wet suits come in nine patterns and are obtainable only on Tortimer Island in exchange for 40 medals. Along with several other tools, a rental eet suit is available while the player is on the island. In New Horizons, wet suits can be purchased from the Nook Stop, Nook Shopping, or Nook's Cranny. While swimming and wet suits do not exist in Animal Crossing: Pocket Camp, the fish-logo diving suit dress resembles a wet suit.

Players cannot wear other clothes while they are wearing a wet suit; only shoes, headwear and accessories remain visible. Other clothing articles remain worn under the wet suit, but cannot be seen nor removed until the wet suit is removed.

Players cannot enter the Able Sisters changing room while wearing a wet suit or save one to a slot on a wand.