In Animal Crossing, bagworms do not crawl back into the tree after being shaken unless the player leaves the acre.

"I caught a bagworm! Guess I'm a bragworm!"

"The bagworm is not a worm per se, but rather any moth of the family Psychidae while in its caterpillar phase. Bagworms construct their cocoons by cutting leaves or branches to the length of their own bodies. Next, they hang these leaves or branches on shrubs or trees and spin their cocoons around them. Fascinating! Interestingly enough, only males of the species become moths. Females spend the rest of their lives in the cocoons. The black, furry males fly from cocoon to cocoon, leaving the females to lay 500 or so eggs, then die. Just imagine it! 500 or more eggs! And then they die! That's not very sporting, if you ask me. Not at all! I can't see any female owls standing for that nonsense. My dear old mum would have given my da an earful, wot! In any case, where was I? Ah, yes. Bagworms, bagworms. Quite the pests, they are... Voracious in the extreme! An infestation of bagworms can defoliate entire trees in surprisingly rapid fashion. Gluttonous monsters! This is particularly harmful, sometimes fatally so, in evergreens, whose needles are never replaced. Hundreds and hundreds of bagworms...eating and eating... stuffing their bug-gullets... Bleeech! Wretched villains! Hooo... But I digress..."

Blathers will say this after taking the bagworm:

"In time, a bagworm transforms into a bagworm moth, eh wot? The bagworm's casing is really rather unfashionable, bordering on hideous. Ah, but by sticking wool threads into the bagworm's casing, you can make a little 100%-wool coat for it! Of course, that would be mad. And inside that wool coat would be a big moth, which no one needs..."

Once donated, bagworms can be found in the upper left corner of the insect room in the museum, hanging from a tree.

Upon donation to the museum, the bagworm can be found on the leftmost tree in the back of the upper right room of the Insect section. The exhibit has this to say about the Bagworm:

"Bagworms are certain moths in caterpillar phase. They stay in cases or cocoons for warmth in winter. They construct their cases by sticking silk threads together between leaves or branches. Females don't have wings, and some simply wait inside their cocoons for males to come by to mate."

When Blathers accepts the bagworm for donation, he says:

"The bagworm is, in fact, not a worm at all, but a caterpillar instead. The filthy fraud uses silk and leaves to spin a cozy bag for it to hide inside-hence the name. Some find it cute the way bagworms dangle from trees. But the truth is they're gluttonous monsters. These beasts love to stuff their bug-gullets full of leaves, devouring the very trees they hang upon. Wretched villains is what they are." 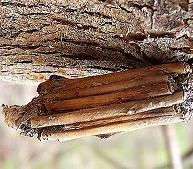 Bagworms are the larvae of various species of moth that all build cocoons from environmental elements such as lichen, plant material, and sometimes silk. They measure from one to fifteen centimeters.

Bagworms can be found around the world, and there are around 600 known species. The casing of the bagworm serves to protect and camouflage the larvae until it emerges as a moth.