The Mantis[nb 1] is a bug in the Animal Crossing series that has appeared in every game to date. Starting in Animal Crossing: City Folk, when the Mantis approached, it will raise its head in defense. If disturbed long enough, it flies away into the air with a buzzing noise.

In the games that the Mantis appears in, it is a uncommon bug that the player can encounter, and can be found on flowers. In Animal Crossing: New Horizons, it can be caught from spring to fall.

"I caught a praying mantis! Some people keep these as pets, you know?"

"I caught a mantis! The hunter is the hunted!"

"I caught a mantis! He didn't have a prayer!"

"I caught a mantis! Time to pay your respects!"

As with all fish and bugs in the Animal Crossing series, the Mantis can be donated to the museum. Upon donation, Blathers will say the following in their respective games:

"Ah yes, the infamous mantis...Tell me, does it seem to you that it's almost TOO aware of us? Like it's studying us...It's rather as if it were questioning our reason for existence, eh wot? It's eyes...They're far too judgmental. Additionally, the manner in which it uses its scythe-like forelegs to kill and feed...So very vivid! So graphic! Blech! Grisly little beast!"

"I imagine you'll think I'm having a bit of fun, but I assure you, I am serious... After mating, the female mantis will kill the male and devour him on the spot! Blech! The very thought gives me the gags! I must say, I consider myself most fortunate not to have been born a mantis. Hoo, I might have had to squash myself..."

"Tell me, <Player>, have you ever seen the egg case of a mantis? It's not much to look at really. Just a little sack about the size of your fist. It's not even all that vile... But come spring, it bursts asunder and hundreds of baby mantises spring forth! I daresay my issues with bugs began when one such egg case ruptured within my desk. The horror..."

The Mantis can be found towards the back of the museum, perched atop a rose on the upper terrace.

Upon being donated, the Mantis can be found in the room of the bug exhibit with the light in, resting on some flowers near the light. The exhibit has this to say about the Mantis:

"Mantises are known for the praying pose they sit in while ambushing unsuspecting prey. They'll snatch whatever is moving nearby and can even capture creatures larger than themselves. When threatened, mantises will spread their thin green wings to appear more intimidating."

"Hoo! Don't let the mantis's angelic pose fool you... for it is truly monstrous. The mantis is known for its large size and tremendous strength...and for sickle-like arms that pack a punch. And though they tend to eat bugs and spiders...mantises have been known to dine on small animals too! And those eerie eyes! Oh my! Did you know it has five of them! Two big ones and three small!"

Once donated to the museum, the Mantis can be found on the tropical flower bed near the butterfly exhibit with the Stinkbug and the Tiger Beetle 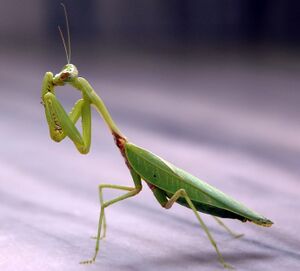 It is unclear as to what type of mantis appears in Animal Crossing, as there are roughly 2000 species world-wide. However, it seems likely that it is Hierodula patellifera, the giant Asian mantis, a widespread variety of mantis that can be found across South Asia and the Pacific islands.

Mantids can be traced back to over 35 million years ago, and are related to cockroaches. They can be found across temperate and tropic areas all across the world, and can fly. They are strictly carnivorous, and rarely think twice about attacking larger animals.