The Ladybug (known as the Spotted Ladybug in Animal Crossing) is a bug in the Animal Crossing series. It is a small, black and red beetle that appears on flowers throughout spring and summer. They are common and worth 200 Bells. They will fly away if players approach them too quickly or walk onto the flower they are crawling on. Their buzzing when they fly is quiet.

"I caught a seven-spotted ladybug! It's red! And small! And so cute!!!"

"I caught a ladybug! So lovely, so petite!"

"I caught a ladybug! Sorry to disturb you, ma'am."

As with all other fish and insects in the Animal Crossing series, the Ladybug can be donated to the museum by talking to Blathers the curator, who will also give information upon donation.

Blathers, the curator of the museum, says the following when it is handed to him for donation:

"Ladybugs are one insect I thought might appeal to me. Then I made the grievous error of touching one. This vile fluid appeared from someplace and.. Oh, it was everywhere! Blech! Utterly appalling!"

The Spotted Ladybug can be found nestled among the flowers in the center of the insect room after donation.

"I've heard it said that ladybugs are "so cute!" Sadly, I must disagree. I touched one once, and this vile yellow fluid... Blech! I shan't discuss it... Hoo.. If that's "cute," then I weep for the world!"

After donation the Ladybug appears in the museums first insect room, on the left side, on the flowers between the palm trees.

The following information is what Blathers says to the player upon donation of the Ladybug:

"Mad as it sounds, I find a lone ladybug quite fetching... But they tend to cluster in cold weather. If you were to flip over a rock in winter, you might see the underside crawling with them... Such vileness! Bleeeech! The very thought gives me the quivers!"

After donation, the Ladybug can be found sitting on a flower on the lower terrace of the insect room.

Upon being donated, the Ladybug can be found in the first room of the bug exhibit, on the red flower on the right side.

"Despite the name, not all ladybugs are "ladies". There are also male ladybugs. Though you'll see different ladybugs with different numbers of spots, they don't get more as they age. Ladybugs eat insects harmful to crops. A few species eat the leaves of crops, but most are beneficial. They're tough against the cold, but during winter they stay in groups under dry leaves for warmth."

"Yes. Yes. Ladybugs are quite beloved thanks to their tiny round shape and adorable spots. To that I say BAH! The fact of the matter is, some have stripes instead of spots. And SOME have no markings at all! No, I shall never understand why it is said that when a ladybug lands on you.. you'll have good luck. I shall only have a fainting spell." 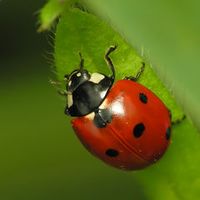 Frequently referred as a "ladybug" in the U.S. or a "ladybird" in Britain, ladybird beetles contain 5,000 species of Coccinellidae, worldwide. Species can vary from number of spots to body shape, and even color. In fact, tan varieties of ladybird beetles exist. The ladybird beetle represented in the Animal Crossing series is Coccinella septempunctata, the Seven-spot ladybird beetle. It lives almost anywhere where there are aphids, its main prey, to eat. Ladybird beetles are considered by many to be beneficial to plants due to their eating habits- aphids themselves eat plants, so by introducing ladybird beetles, plants can be protected. The seven-spot itself was introduced to North America in this manner.

The yellow fluid that Blathers refers to is called reflex blood; the ladybird beetle breaks its own joints to induce this bleeding. The blood has an unpleasant odor which keeps predators at bay if the warning colors do not suffice.