Prior to Animal Crossing: New Leaf, the jellyfish is unique in that it has the shortest range of any fish at only two weeks (August 16 through August 31), and that it has the lowest selling price of any fish at 100 Bells. While not catchable in Animal Crossing: New Leaf, jellyfish appear as obstacles while swimming that stun the player if swam into.

"I caught a jellyfish! I wonder how it would taste on some toast..."

"I caught a jellyfish! I'm in some kind of jam!"

"I caught a jellyfish! Now all I need is a peanut-butter fish."

As with all sea creatures in Animal Crossing: New Horizons, the moon jellyfish was added in the 1.3.0 Free Summer Update (Wave 1).

"I got a moon jellyfish! Now to find a sun peanutbutterfish."

As with all fish, bugs, and sea creatures in the Animal Crossing series, the moon jellyfish can be donated to the museum by talking to Blathers. He will tell the player the following upon donation:

"Jellyfish and other gelatinous creatures are some of the ocean's most beautiful animal life. Some of them do pack a painful sting, but you'll be fine if you observe them from a respectful distance. Now than, let's get this one squared away in it's new home, eh wot?"

"You can actually find these in restaurants, though which ones I do not know. Jellyfish can grow to be almost three feet long, did you know that?! That crunchy texture... It takes rather an open mind to enjoy, eh wot?"

"...Hoo, are you aware that the jellyfish is completely without bones? There's a legend that says the jellyfish had bones long ago, but they were taken away by a sea deity. ...Yes, the reason was that the jellyfish was quite the gossip and was eventually punished for it... Getting boneless... Rather a stiff punishment, eh wot?"

The jellyfish appears in the museum's right circular tank. It just hovers in the same place, occasionally jumping forward a bit.

"Ah, the moon jellyfish...what's not to love about this pretty floating flower of the sea... Well, I suppose its tentacles do give a sting when touched...but it's only a mild thing to the likes of us. Other creatures may not be so fond of this translucent beauty. Though who can blame them, really? Moon jellyfish have stinging cells called cnidocytes that kill fish and other small critters that float by. And they use their "oral arms" to pull these morsels into their mouths and stomachs. Indeed, one need but observe the moon jellyfish to see how brutal AND beautiful nature can be."

After being donated, it will be visible in a large swarm under a floorglass by the sea butterfly's tank.

During a Fishing Tourney, when given a Jellyfish, Chip will say the following:

"I've heard of jellyfish being used in Chinese food, but it's also great in burritos! Nyuuuk nyuk nyuk nyuk!" 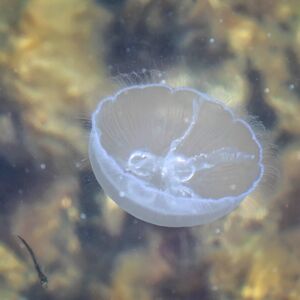 The moon jellyfish is almost entirely translucent, usually about 25–40 cm (10–16 in) in diameter. It feeds by collecting medusae, plankton, and mollusks with its tentacles, and bringing them into its body for digestion. It is capable of only limited motion, and drifts with the current, even when swimming.