Seaweed (ワカメ, Wakame) is a type of sea creature in the Animal Crossing series, introduced in Animal Crossing: New Leaf. In New Leaf, it is used in the Oyster Salad recipe for the Harvest Festival.

While initially absent from Animal Crossing: New Horizons, Seaweed was added in the 1.3.0 Free Summer Update in July 2020.

"I got some seaweed! I just couldn't kelp myself!"

"I got some seaweed! I couldn't kelp myself."

Seaweed is used as a cooking ingredient in the cooking recipes for the following items:

Upon the players' donating the Seaweed to the museum, it can be found in the large pool in the first room of the sea exhibit, along with many other species of sea creatures. It is found in the corner near the big rock close to the entrance of the large saltwater exhibit. The exhibit has this to say about the Seaweed:

"Seaweed can be over three feet long. When its spores attach to rocks, they take root and grow. Seaweed is naturally brown, but turns to the dark-green color we associate it with when cooked. It tends to spoil easily when picked, so various preservation methods have been developed as a necessity. Such methods of preservation are sprinkling ash and drying it out, or boiling it and adding salt."

When the seaweed is donated to the museum, Blathers will say the following:

"Let it be known that seaweed is a misnomer of the highest order! That is, it is not a noxious weed so much as it is a marine algae most beneficial to life on land and sea. Seaweed, you see, provides essential habitat and food for all manner of marine creatures. And it creates a great deal of the oxygen we land lovers love to breathe too, hoo! And yet, I can't help but shudder when the slimy stuff touches my toes during a swim. Hoot! The horror!"

The Seaweed is located in the shallow sea fish tank with the walk-through tunnel, to the left of the stairs.

During a Fishing Tourney, when given a Seaweed, Chip will not score the sea creature but will say the following:

"You wanna know something cool? Seaweed is getting eaten all over the globe these days! Of course, I'm always snacking on it since it's just so chock full of tasty minerals! YUM!" 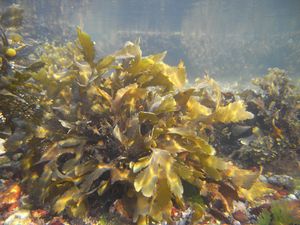 Although seaweed resemble plants, they are actually brown algae. The type of seaweed found on beaches and kelp in the ocean are included as brown algae. Worldwide, there are 1500–2000 known species of brown algae. Some species of brown algae, including kelp, can reach 60 meters in length and form underwater forests. Brown algae produce alginic acid, which is extracted for use versatile roles such as waterproofing, fireproofing, gelling agents, thickening agents for ice cream, smoothies, and cosmetics; making impressions for dentistry, prosthetics, and life-casting; and many more. Certain types of brown algae are edible, most notably, nori, which is to wrap rice and meat in sushi. Brown algae reproduce by spores and gametes, and they are most closely related to yellow-green algae.