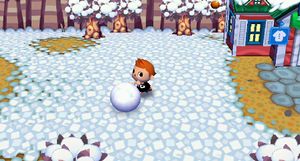 A player rolling a snowball to increase its size.

Snowballs appear in every Animal Crossing series game to date; they will appear only during the winter and can be used to create a snowman. When players find a snowball, they can roll it in the snow to make it grow. The player is able to grab the snowball and roll it around once it reaches a certain size, which gives them more control over the snowball.

If the snowball falls in the river, sea or a pond, it melts. If a snowball is hit with an axe or a shovel, it breaks. It will also break if it lands in a hole, falls from a cliff, or is crushed between the player and an object. The latter only happens with snowballs not big enough to be rolled around.

Snowball in the river

Once two snowballs are large enough, players can push them into each other and create a snowman. If the snowman likes the proportions of the snowball body that the player created for him, then he will reward the player with a piece of furniture from the Snowman Series. However, if the proportions are incorrect, the snowman acts depressed and gives no reward.

In Doubutsu no Mori, Animal Crossing, and Doubutsu no Mori e+, the player must initially control a snowball much like a ball, kicking it. Snowballs cannot initially appear in acres that contain the player houses, Tom Nook's store, the train station, the lake, or the museum. If 2 snowballs are stacked together, a snowman is created.

In Animal Crossing: City Folk, the bus to the city will not come if a snowball is blocking its path. If a snowman is built in this area, the player will be unable to access the city for four days, because snowmen cannot be moved or destroyed by the player.

In Animal Crossing: New Leaf, the size of the snowballs used determines the type of snow person built. The four snow people, in order from largest to smallest, are the Snowman, Snowboy, Snowmam and Snowtyke.

In Animal Crossing: New Horizons, snowballs can only be kicked around initially, but can be rolled around once they grow enough in size. When kicked or rolled over snow, they grow in size, and when kicked or rolled over other surfaces, they shrink. A snowball will eventually break apart if it is rolled off snow enough. If 2 snowballs are stacked together, a snowboy is created.