The Sea Bass (スズキ, Suzuki) is the most common oceanic fish in the Animal Crossing series. It has a large shadow that is often confused with rare fish, such as the Tuna, and is found all day, at any time of the year. In Animal Crossing, however the Sea Bass does not appear from mid-August to approximately the 10th of September.[1] Therefore, during the first ten days of September, only Red Snappers, Barred Knifejaws and, during rain, Coelacanths will appear in the ocean. This allows the player to earn large amounts of Bells in a short time. In New Leaf, it is used in the Soup de Poisson and Sea Bass Sauté recipes for the Harvest Festival.

"I caught a sea bass! See? Bass! (Why do I keep saying things like that?)" 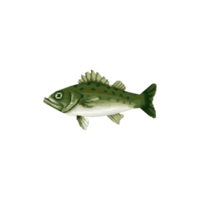 "I caught a sea bass! Not you again!"

Alternate catchphrase: "I caught a sea bass! What?! You again?!"

Like all fish and bugs in the Animal Crossing series, the Sea Bass can be donated to the museum by talking to Blathers, the curator. He will tell the player some information about it when the player donates it.

"The sea bass is a fleshy white fish with a rather delicate flavor, eh wot? It's tasty prepared any which way, but I recommend a non-traditional dish... Sashimi! Indeed, consume the fellow raw! You shan't be disappointed!"

"...Ah, hoo, the sea bass. In some parts of the world, these fish have a different name as juveniles. They change names once they mature, eh wot? What's more, these names can differ from region to region... It's almost as if the sea bass is some sort of secret agent, eh wot?'""

The Sea Bass will appear in the ocean fish tank located at the back of the aquarium section of the museum.

"Sea bass are famous for their delicious white meat as well as their large size. If they ingest something inedible, they open up their mouths and gills and violently shake their heads. This generally manages to expel the foreign material, though it has the added effect of looking rather odd. Much like their freshwater cousins, sea bass have a strong pull, making them a great challenge for anglers."

In Animal Crossing: New Leaf, when given a Sea Bass during a Fishing Tourney, Chip will say:

"I must say, when it comes down to it, sea bass are delicious, no matter how you prepare them. And hey, they're pretty good even if you don't do anything to 'em! YUM!"

When the player donates a Sea Bass, Blathers will say this about it before thanking the player for his/her donation:

"Sea bass is a name given to a variety of different species of saltwater fish. They are a varied bunch with some as small as four inches and some as staggeringly ginormous as eight feet! "Sea bass" is a bit pedestrian, though. Many species have better names, such as "redbanded perch." Or the delightfully whimsical dusky grouper! Or the potato cod! WILL NO ONE THINK OF THE PINK MAOMAO?!"

The Japanese sea bass is a fish found in the western Pacific Ocean. They are popular as food and are a popular target among Japanese anglers.