For the balloon item held in the player's hand, see Balloon (item). For the gift hanging from the balloon, see Present.

Balloons, also known as balloon presents, occasionally float in the air across town, carrying a present with them. The balloons can be shot down with a slingshot to obtain the present. If shot down over water, it will land in the water and be unobtainable. Presents will also disappear if there are no free tiles for them to land on; this may occur when the ground is populated by patterns (except in New Horizons), fruit, weeds, placed furniture, or other items.

Balloons seem to float randomly over the town, but they in fact originate on the edges of the map at specific times, different for each town. The times they will appear will all end with the same minute value; for example, if players see a present float in from the edge at 5:45, they can be sure that each time it floats in will be a time ending in the minute value "4" or "5" depending on the game. Presents can then appear at times such as 7:55, 2:34, or 3:15. In Animal Crossing: Wild World presents only appear from 10 AM to 4 PM. In other games they appear 24 hours a day. 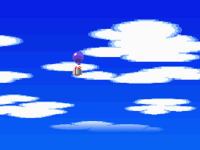 A balloon floating on the top screen in Animal Crossing: Wild World

In New Leaf, presents can be caught by a net or shovel near the beach, once the balloon flies low enough. When shot down, they will contain items from the Balloon Series. They can also contain the Balloon Hat. They fly lower than in previous games and may fly to the south for a period of time if their path is obstructed by a building. Like in Wild World, they appear when the current time ends in a "4" (e.g. 10:04, 10:14, 10:24, etc.). Balloons spawn at alternating sides of the town (e.g. from the west at 10:14, from the east at 10:24, and so on), and take approximately five minutes to cross the town.

In the Welcome amiibo update, once all items in the Balloon Series are obtained, balloons can carry the following items: 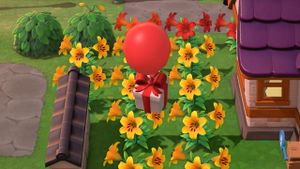 As in previous Animal Crossing series games, balloons carrying presents return in New Horizons and appear more frequently than before. Balloons can be heard from some distance away by the sound of blowing wind. Their shadows can no longer be used to locate them as they are dynamic shadows, and therefore do not appear directly underneath the balloon. The Slingshot can be used to pop the balloons, though a net can also be used if the balloon is close enough to the edge of a north or south-facing cliff.

Balloons can now be multiple colors: red, yellow, green, and blue. These balloon presents can contain DIY crafting recipes, Bells, furniture, clothing, or crafting materials, such as clay, wood or iron nuggets. While all four colors can drop furniture, clothing, or DIY's, only blue balloons can drop crafting materials, and only yellow balloons can drop Bells. Once 300 balloons have been shot down, a golden balloon will float by, which contains the recipe for the Golden Slingshot.

Each balloon popped counts towards the "It's Raining Treasure!" Nook Miles reward. After popping 300 balloons, a golden balloon will appear in town. Popping balloons may appear as Nook Miles+ objectives.

This page could be improved with the addition of images.
You can help by uploading one or more images and including them on this page.
Retrieved from "https://nookipedia.com/w/index.php?title=Balloon&oldid=1056310"
Category:
Hidden categories: